The Doctrine of Christ

The latest speculation about Mormon doctrine comes from lawyer turned “apostle” D. Todd Christofferson who spoke about the subject at the April 2012 General Conference, calling it “The Doctrine of Christ.” 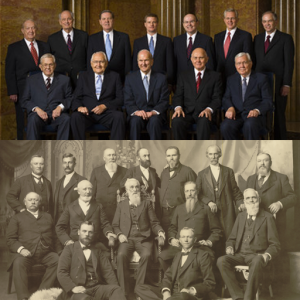 In this talk Christofferson makes the following observation:

“In some faith traditions, theologians claim equal teaching authority with the ecclesiastical hierarchy, and doctrinal matters may become a contest of opinions between them. Some rely on the ecumenical councils of the Middle Ages and their creeds. Others place primary emphasis on the reasoning of post-apostolic theologians or on biblical hermeneutics and exegesis. We value scholarship that enhances understanding, but in the Church today, just as anciently, establishing the doctrine of Christ or correcting doctrinal deviations is a matter of divine revelation to those the Lord endows with apostolic authority.”

According to Christofferson, then, Mormon doctrine is the teaching of “authorized” church leaders given by “divine revelation.” He continues,

“At the same time it should be remembered that not every statement made by a Church leader, past or present, necessarily constitutes doctrine. It is commonly understood in the Church that a statement made by one leader on a single occasion often represents a personal, though well-considered, opinion, not meant to be official or binding for the whole Church. The Prophet Joseph Smith taught that ‘a prophet [is] a prophet only when he [is] acting as such.’

“ ‘To this point runs a simple story my father told me as a boy, I do not know on what authority, but it illustrates the point. His story was that during the excitement incident to the coming of [Johnston’s] Army, Brother Brigham preached to the people in a morning meeting a sermon vibrant with defiance to the approaching army, and declaring an intention to oppose and drive them back. In the afternoon meeting he arose and said that Brigham Young had been talking in the morning, but the Lord was going to talk now. He then delivered an address, the tempo of which was the opposite from the morning talk.’”

In a footnote, Christofferson adds that Clark didn’t actually know if the story his father told even happened. So for Christofferson and Clark, an unverified story, perhaps folklore, illustrates the principle that even the President of the Church himself may not always be moved upon by the Holy Ghost when he addresses the people? This is not what those like Orson Hyde said about Brigham Young:

“Some persons say that Brigham does not give revelations as did Joseph Smith. But let me tell you, that Brigham’s voice has been the voice of God from the time he was chosen to preside, and even before. …He possesses skill, wisdom, and power that trouble wise men and rulers. God will make him a greater terror to nations than he ever has been. I will now quote a few passages from the revelations of God as contained in the Book of Doctrine and Covenants:—‘My words shall all be fulfilled, whether by mine own voice out of the heavens, or by the voice of my servants, it is the same.’ Again, concerning his servants—‘Whatsoever you shall speak by my Spirit shall be Scripture—shall be the word of the Lord, the will of the Lord, the mind of the Lord, and the power of God unto salvation.’ Again, from the New Testament, Jesus says, ‘Whosoever heareth you (whom I send) heareth me.’” (Orson Hyde, Journal of Discourses 8:234-235, October 7, 1860)

Which Mormon “prophet,” will they claim, didn’t have the “constant companionship” of the Holy Ghost? If they can’t tell us that, then they can’t say the “prophet” did not always speak by his power.

“Apostle” Moses Thatcher claimed that unlike “hireling” Christians, Mormons speak the truth when delivering doctrine to the “saints”:

“They [the elders of Israel] speak as they are moved upon by the Holy Ghost and not as those paid with a price. A true servant of God is not afraid of public opinion, but will rebuke that opinion if wrong. …I bear to you my testimony that Wilford Woodruff is a prophet of the Most High God. I know that he speaks by revelation. He communes with Brigham Young, though Brigham Young, we say, is dead. Joseph, the great modern prophet since death, has communed with our venerable living leader. Thus are we lead step by step through the inspiration that comes from God and his servants;…” (Brian Stuy, Collected Discourses 2:316-317, November 2, 1891) 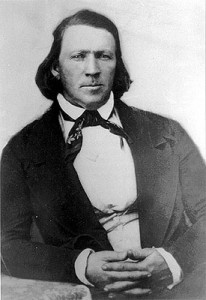 Brigham Young was emphatic that neither he nor anyone authorized by him ever taught false doctrine and challenged the world to show otherwise:

“You may ask the question: Has no one Elder in Israel ever taught false doctrine? Yes, but no man has who has been authorized to teach, guide and direct the Saints. Did Jesus, Peter, James, John or Joseph Smith ever teach a false or incorrect doctrine? Not that you or I know of; we cannot find it.” (Journal of Discourses 12:310, November 29, 1868)

This would include Young’s teachings on Adam-god, blood atonement, and the priesthood ban on blacks.

Brigham Young also said that false doctrine, if taught, would be detected by the “saints” almost immediately:

“I can say this for the Latter-day Saints, and I will say it to their praise and my satisfaction, if I were to preach false doctrine here, it would not be an hour after the people got out, before it would begin to fly from one to another, and they would remark, ‘I do not quite like that! It does not look exactly right! What did Brother Brigham mean? That did not sound quite right, it was not exactly the thing!’ … I will defy any man, to preach false doctrine without being detected; and we need not go to the Elders. of Israel, the children who have been born in these mountains possess enough of the Spirit to detect it.” (Journal of Discourses 14:205, August 13, 1871)

What is Christofferson talking about when he says that “It is commonly understood in the Church that a statement made by one leader on a single occasion often represents a personal, though well-considered, opinion, not meant to be official or binding for the whole Church?” He gives no specifics, but I can provide examples from Conference Addresses when the speaker gives his opinion — and clearly states that it is an “opinion.” Here’s one:

“In my opinion, there were classes and races, and separation into different groups and conditions before we came to this world, and all are getting what they are entitled to receive here.” (Melvin J. Ballard, Conference Report, April 1915, 62. For a few more examples see Journal of Discourses 1:220, 8:21; Collected Discourses 4:277; Conference Report October 1951, 85)

The Conference Addresses of the Church (from the Journal of Discourses to the present) are full of such opinions. How can you know when these men are giving their opinions? Why, they tell you so.

Christofferson would have members think Church leaders are prone to intermix opinion, speculation and folklore in with their doctrinal teachings without mentioning it, perhaps forgetting that they are (and were) commanded to speak by the power of the Holy Ghost. Wilford Woodruff taught the opposite:

Try to pin down these current “apostles” about how and when Mormon “prophets” and “apostles” did not have the gift of the Holy Spirit, or when their “apostles” were not authorized to teach and proclaim doctrine. They will not give any satisfactory answers. What is the doctrine of Christ according to Mormon Scripture? It is the voice of Christ spoken through his servants by the power of the Holy Ghost:

“What I the Lord have spoken, I have spoken, and I excuse not myself; and though the heavens and the earth pass away, my word shall not pass away, but shall all be fulfilled, whether by mine own voice or by the voice of my servants, it is the same.” (D&C 1:38)

Since no Mormon audience that we know of ever spoke out against any of the sermons in the Journal of Discourses or subsequent Conference Reports, we can rest assured that these men were speaking by the “power of the Holy Ghost” and were indeed teaching doctrine and scripture unless (as they did frequently) they indicated that they were just giving their opinion.

107 Responses to The Doctrine of Christ