Posted on November 5, 2012 by Sharon Lindbloom 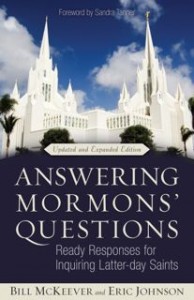 A great new book on the topic of Mormonism is now available. Co-authors Bill McKeever and Eric Johnson have just released Answering Mormons’ Questions: Ready Responses for Inquiring Latter-day Saints (Kregel Publications, 2012). Chapter 2 seems particularly timely for the ongoing conversation here at Mormon Coffee: “Why won’t you let us define our own doctrine rather than telling us what we believe?” The summary provided at the front of the chapter explains:

“When Christians attempt to define important doctrines as taught in Mormonism, a dispute potentially can arise over whether or not a particular teaching is truly LDS doctrine. Some Mormons even back away from more controversial teachings of their church leaders, especially when those particular leaders are deceased. However, if there is any authority in the Mormon Church, surely it must lie in the pronouncements provided by the leaders, along with official curriculum produced by the church.” (31)

In this blog I can only provide a brief overview of some of the main points in the chapter, but here goes.

McKeever and Johnson explain the office of Mormonism’s living prophet (quoting Gospel Principles page 45, “The inspired words of our living prophets are also accepted as scripture”) and then discuss the question, “Is the Mormon Prophet a Trustworthy Source?” They write,

“While Mormons may give lip service to the idea that their church alone has access to modern-day revelation from God, many have brushed aside claims made by their leaders with whom they disagree, especially after those particular leaders have died. This position sends a clear message that they consider the ‘revelation’ of these leaders nothing more than the personal opinion of the speaker and not something to be taken seriously. One proponent of this thinking is LDS apologist Michael R. Ash, who states that ‘the official position of Mormonism is that of a fallible prophet, yet few Mormons really seem to believe it. …we can know if leaders speak the will of God when we, ourselves, are “moved by the Holy Ghost” (D&C 68:3-4). The onus is upon us to determine when they speak for the Lord. If we rely solely on the revelations of the prophets, without seeking our own personal confirming revelations, we tend to tacitly accept their revelations as infallible” (Shaken Faith Syndrome: Strengthening One’s Testimony in the Face of Criticism and Doubt, 21-22. Italics in original). He also warns, “We need to be aware that sometimes we are too quick to uncritically accept the things we hear or read—even from sources such as Church leaders or in Church magazines” (ibid., 16).

“Ash’s claim that church leaders and official church publications can be products of the day and culture means that some false ideas from Salt Lake City could possibly be disseminated (for example, he pointed to the issue as to the place for the Book of Mormon lands, saying ‘prophets may offer speculations like any other student or scholar,’ 25). This salad-bar philosophy of picking and choosing among the leadership’s teachings is not easily supported by official church manuals and general conference addresses through the years.” (35)

McKeever and Johnson then provide supporting statements by four past Mormon prophets, but I will include only one here:

“I may have my own ideas and opinions, I may set up my own judgment with reference to things, but I know that when my judgment conflicts with the teachings of those that the Lord has given to us to point the way, I should change my course. If I desire salvation I will follow the leaders that our Heavenly Father has given to us, as long as he sustains them.” (Teachings of Presidents of the Church: George Albert Smith, 60)

McKeever and Johnson point out,

“Clarifying official church doctrine is not the job of Mormon lay members or employees at church-owned schools. President Ezra Taft Benson (1899-1994) stated, ‘Doctrinal interpretation is the province of the First Presidency. The Lord has given that stewardship to them by revelation. No teacher has the right to interpret doctrine for the members of the Church’ (Teachings of the Living Prophets Student Manual: Religion 333, 25). … Apostle M. Russell Ballard declared to a general conference audience, ‘When we hear the counsel of the Lord expressed through the words of the President of the Church, our response should be positive and prompt. History shows that there is safety, peace, prosperity, and happiness in responding to prophet counsel’ (Ensign, May 2001, 65. Quoted in Teachings of the Living Prophets Teacher Manual: Religion 333, 6).” (36)

“With all of this said, ultimately the Mormon people are left having to depend on living mortal men for guidance, even when their teachings may deviate from the Bible. Christians, on the other hand, can rest assured that their living prophet (Jesus) will never lead them astray. Reading the Bible and understanding His special revelation thus becomes the goal of every faithful Christian believer.” (39-40)

For those Latter-day Saints at Mormon Coffee who are frustrated because they believe the Christians here won’t let them define their own doctrine, I pose three questions from Answering Mormons’ Questions:

42 Responses to McKeever and Johnson on Defining Mormon Doctrine