In a recent article applauding how more Evangelical Christians are apparently accepting the Republican presidential candidate in spite of his Mormonism, Dr. Richard J. Mouw—who recently announced that he’s stepping down as president of Fuller Theological Seminary—explained that

“anti-Mormon sentiment runs strong among evangelicals. We differ on this from mainline Protestants and Catholics. Those two groups don’t necessarily like Mormons, but the evangelical version of the dislike is more intense.” 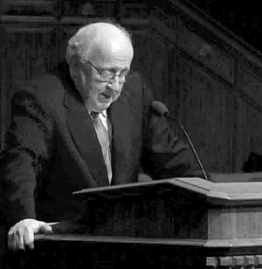 Mouw, you may remember, preceded Ravi Zacharias in the pulpit a few years ago at the Mormon Tabernacle in Salt Lake City, making an “apology” on behalf of the Christian community, even though he was not commissioned to do so and had been warned about doing this in the first place. His seven minutes of fame trumped Ravi’s words in the next day’s newspapers and other media accounts, which was a shame since the sermon was definitely Christ-centered. (For more information, see Are “we evangelicals” guilty of bearing false witness when it comes to explaining Mormon doctrine?)

Mouw’s June 17th (2012) Washington Post article comes on the heels of his recently released book titled Talking with Mormons: An Invitation to Evangelicals (Grand Rapids: Eerdmans, 2012) where he makes similar claims. In the Post column, he writes:

“Evangelical hostility toward Mormonism has been there from the beginning. And it has typically been reciprocated. Joseph Smith saw himself as restoring true Christianity from the distortions that had run rampant for almost two thousand years. And the kind of ‘false church’ that loomed large in his mind was represented by the various strands of evangelical Christianity that dominated the religious scene in his part of New York state. The angry denunciations flowed freely in both directions.

“Unlike our mainline Protestant and Catholic counterparts, we evangelicals actively seek converts, and this means that we see Mormons—also passionately committed to evangelization—as direct competitors. In fact, we often compete for the loyalties of the same groups of people. In some regions of South America, for example, missionaries from both movements are aggressively seeking to bring exactly the same villages—whose residents may hold to a form of animistic religious—into our respective folds.”

As attested by his book and article, this Evangelical Christian leader doesn’t see Mormonism as a “direct competitor.” Why? There are at least three reasons.

First of all, as recorded in his book, Mouw seems to sympathize with LDS founder Joseph Smith. Saying that Smith “gave an orthodox-sounding account of salvation matters,” he says it’s possible to “demonize a person who is not a demon,” adding that “evangelicals have to be careful not to sin against Joseph Smith and his followers by setting up false devils” (p. 18—these words are apparently so important that he cites them again on page 87). What did Joseph Smith teach? Let’s start with a God who is opposite in nature to the God of the Bible. For example, Smith said,

“Here, then, is eternal life–to know the only wise and true God; and you have got to learn how to be Gods yourselves, and to be kings and priests to God, the same as all Gods have done before you, namely, by going from one small degree to another, and from a small capacity to a great one; from grace to grace, from exaltation to exaltation, until you attain to the resurrection of the dead and are able to dwell in everlasting burnings, and to sit in glory, as do those who sit enthroned in everlasting power.” (Teachings of the Prophet Joseph Smith, pp. 346-47)

While Mouw doesn’t accept LDS teachings, for some reason he equates publically exposing Smith as sinful. However, the case against Joseph Smith is quite long, with heresy, immorality, and deceitfulness among just some of the many possible charges.

Second, Mouw appears to take Mormon apologists at face value. By this I mean that Mouw accepts the words of his LDS friends (such as BYU professor Robert Millet) on theological issues instead of researching the teachings of the Mormon leaders themselves. When he asked his Mormon friends about the Godhead and the role of good works in salvation, Mouw received answers that sounded very Evangelical. He apparently is easily satisfied, responding, “I believed them and was encouraged.” (p. 40). This is a most naive approach. He also refers to General Conference addresses made by LDS leaders and says that the LDS leadership is more emphasizing the cross, the atonement, and supposedly other distinct Christian doctrines (pages 92-93). However, he does not provide specific evidence to show how this is true. From my regular readings in church manuals, magazines, and web sites, Mormonism is only moving closer to Christianity in the language–not the meanings of the terms. While his Mormon friends may say that they believe in the same things as Evangelicals, his friends don’t have the same authority as the Standard Works and the official teachings by Mormonism’s general authorities. Trust me, Mormonism is still denying or distorting every fundamental teaching of the historic Christian church!

Third, Mouw does not see Mormonism as a cult. I might be wrong, but when he talks about South American villages and animism in his Washington Post article, it almost sounds like he is suggesting that the two groups ought to work together rather than compete. In his book, Mouw refers to his LDS friends and says that “it has never felt to me as though I was talking to members of a ‘cult'” (p. x). He claims that “the label ‘cult’ seems inappropriate for describing the Mormonism that we’ve seen up close.” Then he has the gall on page 30 to call Jehovah’s Witnesses a “cult.” Why? Because “they stick to a party line” and don’t argue amongst themselves. And the JWs don’t have a “world-class” university. These distinctive characteristics sound superficial, at best.

Alan Gomes is a professor at Talbot Seminary and Biola University who wrote a book called Unmasking the Cults (Grand Rapids: Zondervan, 1995). He defines a cult as

“a group of people, which claiming to be Christian, embraces a particular doctrinal system taught by an individual leader, group of leaders, or organization, which (system) denies (either explicitly or implicitly) one or more of the central doctrines of the Christian faith as taught in the sixty-six books of the Bible.” (p. 7)

This definition has historical support, and Gomes makes it very clear in his book that Mormonism is clearly a cult. Gomes received his Ph.D. in historical theology from Fuller Theological Seminary, the same school where Mouw used to be president. Dr. Gomes provides plenty of historical and theological support for his views. Dr. Mouw, on the other hand, has a Ph.D. in philosophy. He doesn’t support his view with outside sources, merely relying on his feeling and the trust he has in his Latter-day Saint friends (mainly BYU professors) to declare that Mormonism is not a cult. Gomes and Mouw disagree. Whose view holds more weight? While Mouw is a fine scholar on Calvinism, he is out of his league on this issue.

Before I close, I need to give one more quote from Mouw’s Washington Post article:

“Hoping to reduce the level of angry rhetoric on the evangelical side, I have encouraged my fellow faithful to engage in friendly give-and-take with Mormons before simply making uninformed pronouncements about their church’s teachings. Some evangelicals have thanked me for taking up the cause. They have friends—even close family members—who are Mormons and have been looking for a more positive approach. But others continue to reproach me. They tell me that I am aiding and abetting an ‘evil cult.’”

My goodness, talk about a straw man comprised of loaded language. From the earlier quote of “intense” “dislike” to “angry rhetoric” and “abetting an ‘evil cult,’” all contrasted with a “positive approach” (his method, of course) of engagement. However, Mouw fails to understand that this is not a contest to see who can get the most converts in a South American village. And this is not a Facebook moment where each group is competing to get as many people to “like” our status. No, this is about eternity, something that this Christian scholar doesn’t seem to understand.

Mouw may have plenty of friends at the LDS university based in Provo, Utah, and even dine occasionally with an apostle or seventy of the Mormon Church. Good for him. But giving the faulty impression that Evangelical Christians are somehow sinning against Mormons and bearing “false witness against our neighbors” because “God is not honored when we’re unfair to people with whom we disagree, misrepresenting what they believe” (p. 22) is a dishonest evaluation. His slam is aimed directly against good Christians who belong to churches and parachurch organizations desiring to see the Latter-day Saint people come to an understanding of the genuine gospel available to mankind. For those who reject pluralism for exclusivism (i.e., that there is only one way to God and repercussions await those outside the fold), the worst thing a person could do for the unsaved is decline to tell them about it by pretending their house is not on fire. Waving and walking by is disingenuous when you know the people inside will perish. On the other hand, doing what you can to warn those inside the house of the impending doom is the very least a good citizen would do.

Truly, what Mouw sees as “Evangelical hostility” is nothing more than what Paul described in Eph. 4:15 as “speaking the truth in love.” Imagine, if you will, those who will one day stand at the Great White Throne Judgment, looking into the eyes of the Judge Himself. Will the unsaved wish they had dined with more friends who had a “positive approach” like Dr. Mouw’s? Or will they wish they had known Christians who were willing to risk relationships in order to offer them the truth? I believe that Dr. Mouw needs to apologize once more, but this time the pardon needs to be requested of his many Christian brothers and sisters whom he has unfairly slandered.

This entry was posted in Friendship, Interaction, and Evangelism and tagged Ravi Zacharias, Richard Mouw. Bookmark the permalink.

29 Responses to “Evangelical hostility toward Mormons”?