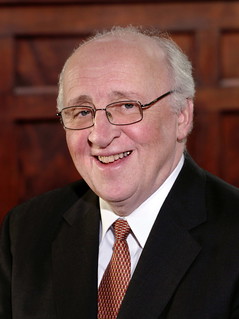 “I would like to think the best, and think that maybe [Richard Mouw] does want to see a major change in the Mormon Church. If that’s the case though, he’s going about it all wrong. But it does go along with… a friend of mine who is a professor back in the Midwest has said that usually if you’re going to have a dialog in this kind of capacity with the Mormon Church… he called it ‘pander-slander.’ You have to pander to the Mormons by slandering your own brethren. And sadly, Dr. Mouw has certainly fit that pattern. I don’t think that Dr. Mouw needs to apologize to the churches and ministries here in Utah. He needs to repent. He really does. That is how serious I’m taking this. He has gone over-the-top in his accusations. And he has in fact… when he accuses us of bearing false witness against the Mormons — I’m sorry, but Dr. Mouw has bore false witness against his fellow brethren. And because of that he needs to repent. And I wish he would, because he is not helping, like I say, evangelism among the Mormons when Christians think, ‘Well, I don’t really need to, because it doesn’t sound like it’s that bad.’ But he also gives, sadly, the sincere Mormon person a false sense of security into thinking that, ‘Well, there’s nothing all that major wrong. And I can hold onto some of my quirky little bits of Mormonism and still be OK.’ No, it’s much more serious than that. And unfortunately Dr. Mouw seems to downplay the significance. It saddens me, it really does… I might sound upset but I’m saddened because I’m seeing how this is affecting the Mormon people as well as Christians. I don’t think Dr. Mouw is the one you should be listening to on this subject. I just don’t. And I’d love to debate him if he wants to. I’ll be glad to meet with him and we can discuss these issues publicly. Because it really needs to be talked about.” (Janet Mefferd show, 7/24/2012)

Listen to the whole thing here.

This entry was posted in Uncategorized and tagged Richard Mouw. Bookmark the permalink.