Mormonism (at best) a very distant cousin of Christianity

Eliza Wood, a contributing blogger to Huffington Post, recently (27 July 2012) wrote an article titled, “Are Mormons Closer to Muslims or Christians?” Her reason for tackling this question:

“As the media shapes our understanding of the Mormon faith, now that we Americans consider electing our first Mormon presidential candidate (Mitt Romney), it might be wise for us to better understand the similarities and the differences among Christianity and these two faiths.”

She begins her article by asking the question:

“Are Mormons any closer to Christians than Muslims? Short answer: no.”

Ms. Wood then provides her readers with a “long answer” to support her claim. She writes,

“While in some ways neither Islam nor Mormonism is very much like Christianity, the two faiths actually have a lot of similarities.”

Ms. Wood then raises no fewer than 19 points of similarity between Mormonism and Islam, including historical, doctrinal, and behavioral aspects of the two faiths.

She doesn’t get everything right, but she adequately defends the validity of her premise: Islam and Mormonism have a lot in common (see Eric Johnson’s Joseph Smith and Muhammad for a good, detailed analysis of the similarities). 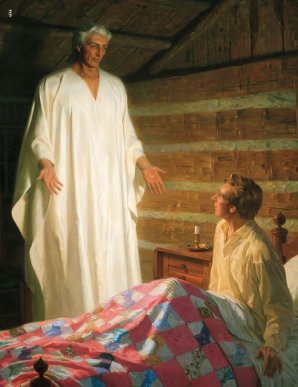 The information Ms. Wood provides her readers regarding how Mormonism and Islam differ from Christianity is vague, but is spot on (as far as it goes). She writes,

“Jesus’ teachings were a bit archived in both [religions] because Muhammad and Joseph Smith were both visited by angels who told them to receive new orders from God. Both have respected Jesus’ messages but moved forward with other teachings and practices that are not consistent with Christianity.”

Of course, Mormons would disagree with this assessment, but only because they are taught that it was historical Christianity that “moved forward with other teachings and practices that are not consistent” with Jesus’ messages.

“…have common ground with Christianity, and much of it. But both Islam and Mormonism are at best very distant cousins of Christianity with some of the same overarching guidance.”

However, she continues, the differences are clear enough that no one should ever need to question the fact that neither of them are Christian religions.

“Neither Islam nor Mormonism is a close enough relative to ever be confused with Christianity. If a Christian of any denomination inadvertently walked into a Mormon [temple] or a mosque, which would be fairly difficult since both allow only members of their faith to enter, there is no way the service could be recognized as a Christian devotion to Christ, but there is plenty of devotion to God going on.”

Indeed, the Mormon temple’s pantomimed “signs,” closely guarded “tokens” (special handshakes), masonic imagery, vows of secrecy, and unusual temple clothing of hats, sashes and aprons, would never be mistaken for a service of Christian worship–if non-Mormons were allowed to see it. Furthermore, sincere devotion to Mormonism’s God may mark Mormon temple ceremonies, but devotion to the Christian God is nowhere to be found.

“…the next time you read in the press about how Mormons are really Christians, you might want to put on your critical thinking cap.”