Living by the Scriptures 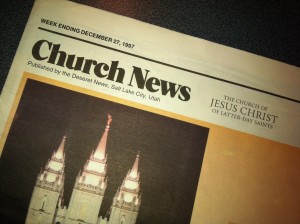 For many years the LDS Church-owned newspaper Church News included a column called “Living by the Scriptures.” This weekly column was described by the newspaper in this way:

“‘Living by the Scriptures’ is another in a series of Church News reader response articles. Was there a time when a particular scripture touched you, when it offered comfort, guidance and much-needed support? If so, please describe your experience in 250-300 words, giving the scripture reference and telling how it affected you.”

In 1997 I decided to send a submission to Church News relating an experience I had with a specific Scripture that gave me comfort, guidance and much-needed support at a pivotal point in my life. This is what I wrote:

“Ye are my witnesses, saith the LORD, and my servant whom I have chosen; that ye may know and believe me, and understand that I am he: before me there was no God formed, neither shall there be after me. I, even I, am the LORD; and beside me there is no saviour.” Isaiah 43:10

Several years ago I was challenged in my faith to examine the claims of a different religion. This other church insisted that it alone was pleasing to God and that my religion was wrong.

I spent many hours each day studying both my own faith and the claims of the challenging faith. I would compare and contrast the teachings of both, endeavoring to come to a firm knowledge of the truth.

As I would study, I would sometimes be overwhelmed by the strong testimonies of those from the other church. Even though the doctrines of this religion were very different from what I had always believed to be true, I found myself periodically thinking, “Maybe this is the true church. Maybe everything I have been taught in my church is not right.”

However, throughout this extended period I could sense God asking me, “But who do they say that I am?” The answer to this question was the key to whether their claims were true or not. God had told me, through the prophet Isaiah, certain things about Himself so I would “know and believe” and “understand” who He is; and this so I could evaluate claims people would make in His name. The knowledge given through this Scripture verse, that there is only one true God – and will never ever be any others – became the anchor that held me firmly to the truth when I was being tempted to turn away and follow after a different God. The Word of God is very precious to me; I thank my Father in heaven that He kept me from deception and helped me to see the foundational flaw in that other church, The Church of Jesus Christ of Latter-day Saints.

My submission was never chosen for publication in Church News and “Living by the Scriptures” is no longer a regular feature in the Mormon newspaper. But I like the idea promoted by the column. To speak of the way God and His Word has been active in our lives is always a good idea. Therefore, I invite you, friends in the Mormon Coffee community, to carry on that old Church News tradition. You may tell us here, or you may tell those people God brings across your path in person, but along with Daniel, those of us who love God should all agree, “It has seemed good to me to show the signs and wonders that the Most High God has done for me” (Daniel 4:2).

Sharon surrendered her life to the Lord Jesus Christ in 1979. Deeply passionate about Truth, Sharon loves serving as a full-time volunteer research associate with Mormonism Research Ministry. Sharon and her husband live in Minnesota.
View all posts by Sharon Lindbloom →
This entry was posted in Bible, God the Father, Truth, Honesty, Prayer, and Inquiry and tagged Discernment, Isaiah 43:10, One True God. Bookmark the permalink.

116 Responses to Living by the Scriptures