Emma had been disappeared. Why?

We all use history to suit our purposes, and Emma simply did not suit the purposes of the LDS Church in the years following her husband’s death.

It was that she hated polygamy and flatly refused to countenance its presence among the Mormon people. (“The Mormon Reinvention of Emma Smith”)

And though Emma Smith shows up in Church materials and talks more often these days than in the past, the Mormon Church continues to present a “reinvented Emma Smith.”

One example provided by Jana Riess is found in the “official narrative” on Emma Smith at lds.org:

After Joseph’s death on 27 June 1844, the Saints knew they would have to leave Nauvoo, so they began to make plans. In 1846 they headed west. Emma, a 41-year-old widow with her aged mother-in-law and five children to care for, chose the security of her home in Nauvoo rather than the unknown perils of the frontier and did not accompany the Saints. (GAK405: Emma Smith)

But in fact, it was Mormon polygamy that held Emma back. 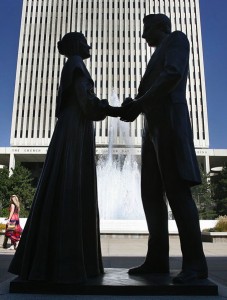 The Mormon Church paints a radiant picture of Emma’s and Joseph’s marriage — he the loving and devoted husband, she the supportive and dedicated wife. While there is every reason to believe Joseph and Emma loved each other deeply, their marriage was filled with turmoil. When Joseph took his first plural wife just six years into his and Emma’s marriage, Emma found the strength to forgive him. This was in about 1833; the young woman was Fanny Alger.

“Mrs. Smith had an adopted daughter, a very pretty, pleasing young girl, about seventeen years old. She was extremely fond of her; no own mother could be more devoted, and their affection for each other was a constant object of remark, so absorbing and genuine did it seem. Consequently it was with shocked surprise that the people heard that sister Emma had turned Fanny out of the house in the night…it was felt that she [Emma] certainly must have some very good reason for her action. By degrees it became whispered about that Joseph’s love for his adopted daughter was by no means a paternal affection, and his wife, discovering the fact, at once took measures to place the girl beyond his reach.” (Ann Eliza Webb Young, cited in Todd Compton, In Sacred Loneliness: The Plural Wives of Joseph Smith, 34)

Emma knew about Fanny and forgave Joseph for his indiscretion, but she was unaware of many of the additional plural wives Joseph secured over the following years. On July 27, 1842 Joseph married his 15th bride, 17-year-old Sarah Ann Whitney. Her parents fully approved of the union and were called on to help Joseph and Sarah find a “safe” time to be together. On August 18th, Joseph wrote to Sarah and her parents:

I know it is the will of God that you should comfort me now in this time of affliction, or not at all. Now is the time or never, but I have no need of saying any such thing, to you, for I know the goodness of your hearts, and that you will do the will of the Lord, when it is made known to you; the only thing to be careful of; is to find out when Emma comes, then you cannot be safe, but when she is not here, there is the most perfect safety; only be careful to escape observation, as much as possible…I think Emma won’t come tonight. If she don’t, don’t fail to come to night. (Cited in Gary James Bergera, Conflict in the Quorum, 27-28; spelling and grammar standardized)

Emma did not know, and it was important to Joseph that she not find out. Yet just a few months later Joseph had persuaded Emma that the doctrine of celestial (plural) marriage had been revealed by God. Emma agreed to allow Joseph to marry two young women, Emily and Eliza Partridge. Some weeks later Joseph married another set of sisters, Sarah and Maria Lawrence, wives #24 and #25. But the Smith family began to unravel at the core.

About six weeks after his marriages to the Partridge and Lawrence sisters [March and May 1843, respectively], Joseph dictated the plural marriage revelation to his scribe William Clayton, perhaps in an attempt to give weight to his arguments with Emma…Emma refused to accept the written version with the same vehemence she accorded Joseph’s verbal arguments. A month later, in August 1843, Emma went to St. Louis to buy supplies for the red brick store that Joseph operated in Nauvoo…On her return to Nauvoo she gave Joseph a drastic ultimatum: get rid of the plural wives or she would leave him. William Clayton’s journal entry for August 16, 1843 documented Emma’s threat. To keep her, Joseph promised Emma he would “relinquish all,” but in recounting the incident to Clayton, Joseph admitted his subterfuge; he would “not relinquish anything.” David Smith’s parents [Joseph and Emma] thus continued a relationship characterized by falsehood and deception on his father’s part and anger and frustration on his mother’s only fifteen months before his birth. (Valeen Tippetts Avery, From Mission to Madness: Last Son of the Mormon Prophet, 14)

Emma may have believed Joseph, or she may have decided to appear to believe him, but the issue of Joseph’s polygamy could not stay dormant in Joseph’s and Emma’s marriage.

At some point during the early spring of 1844, Joseph apparently ordained his young son Joseph to succeed him as eventual president of the church. His move triggered Emma’s determination to rid the church of polygamy, for now it threatened to become her son’s inheritance. She intensified her campaign to force Joseph to end the practice…Unable to terminate Joseph’s plural relationships through persuasion, Emma threatened violence, apparently her own suicide…Emma won. (From Mission to Madness, 14)

Joseph sent the sisters away, but tranquility did not reign for long in the Smith household.

The situation in the Law family [spring 1844] created yet another crisis for the Smiths. Joseph was accused of being too familiar with Law’s wife, Jane. Emma learned of a visit Joseph made to the woman and angrily prepared to return to her family in Pennsylvania. Joseph’s associate, Ebenezer Robinson, reported, “It was a time when [Emma] was very suspicious and jealous…for fear he would get another wife,…[If he did] she was determined to leave and when she heard [of Joseph’s visit to another woman] she Emma became very angry and said she would leave and was making preparations to go to her people in the State of New York. It came close to breaking up his family.” Joseph once again turned the situation around, and Emma remained with him, but it was a tenuous peace. (From Mission to Madness, 15; brackets and ellipses retained from the source cited)

Not long after this Joseph died, leaving Emma in the company of perhaps another 33 grieving widows. Brigham Young soon took on the mantle of leadership for the Mormon Church and began preparations to take the Mormon people west, away from Nauvoo.

[Emma] differed sharply with Brigham Young over the direction he appeared to be leading the church. She firmly opposed the principle and practice of plural marriage, which she was certain would continue under Young’s leadership. Emma saw no reason to travel any great distance with her young family, only to face the same polygamy controversies. Nor was she reticent in voicing her opinion to Brigham Young, who, along with other church leaders, assumed the responsibility for many of Joseph’s other plural “widows” by marrying them in the spirit of the Old Testament leviratic requirements that a man take responsibility for his dead brother’s wife and family. Emma refused to marry any of the church leaders as a plural wife as so many of Joseph’s other wives had done. Disappointed that even Joseph’s death had not eliminated polygamy and alone with five children to support, Emma decided to remain in Nauvoo. (From Mission to Madness, 27)

The 17-year marriage of Joseph and Emma Smith was punctuated by deception, subterfuge, betrayal, infidelity, threats, suspicion, secrecy and anger. This is not a picture that matches the warm and devoted family life the Mormon Church presents in its reinvention of Emma and Joseph Smith.