Atheism is just another blue pill

Posted on September 19, 2013 by Aaron Shafovaloff 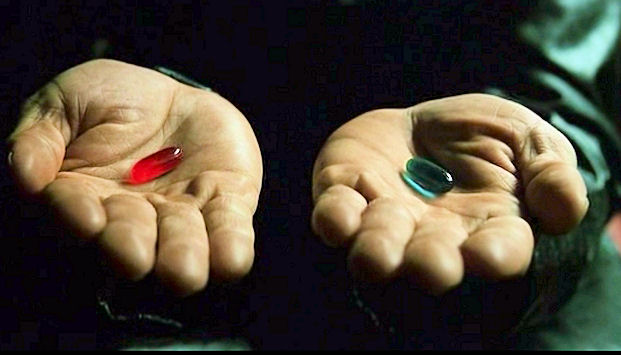 We already live in Narnia.

We live in a universe that had a beginning. Indeed, something exists rather than nothing (this alone is amazing). We live among embodied souls who have intrinsic dignity, beauty, and moral culpability. We live in a universe of real aesthetics, of music and design and order and mathematics and right and wrong and glory and evil. We have a sense that some things are worth it for their own sake. Obligatory for their own sake. Beautiful for their own sake. We have a right sense of the duty of seeking and knowing truth. Minds among us think, reason, relate, rationalize, and introspect. There is love, narrative — even dramatic narrative — and a sense of ultimate purpose. Of the Greater Story, with heroes, and foes, and tragedy, and romance, and victory, and justice. We know that wrong things need to be made right.

This is the reason I won’t join in atheism’s mockery of Mormonism. Atheism mocks Mormonism for making claims to the supernatural. I instead ridicule Mormonism for belittling God and for belittling the gospel. It is a very “serious” ridicule — the kind that (hopefully) maintains a sense of gravity and greatness of the universe, of God, of the gospel, and of the dignity of men and women.

Atheism is just another blue pill. Christ is the only red pill.

44 Responses to Atheism is just another blue pill