Back in September of 2012 Blaze TV aired a special program wherein Glenn Beck sought to dispel the ‘biggest Mormon myths.” I watched the first segment on YouTube where Mr. Beck answered the viewer-submitted question, “We often hear the word polygamy and Mormonism coupled together. Why?” Mr. Beck’s response was quite disappointing. Rather than dispel Mormon myths, he perpetuated them with gusto. 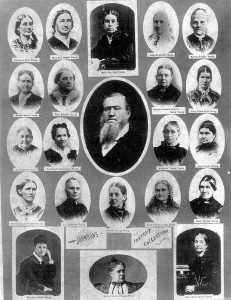 Brigham Young with some of his 56 wives

Mr. Beck began his response by taking a couple of minutes to mock FLDS polygamists and criticize the media, but then he got serious.  Acknowledging that early Mormons did engage in polygamy, he said, “Why did they practice it?” For the following six minutes Mr. Beck laid out a story rife with historical inaccuracies and myths. Here are a few:

Mr. Beck said you can’t understand why Mormons practiced polygamy unless you know the story of the Book of Mormon and that many people died for it – “to have and to read and to share it.” (2:40) And, “In the 1800s people were dying because of the Book of Mormon.” (3:00)

This is pure conjecture; as far as I know, no such historical evidence exists. Mormons have died and continue to die, of course. But there is nothing to tie Mormon deaths directly to having, reading and sharing the Book of Mormon. Mormon persecution was not primarily about the doctrines of the faith, but rather due to politics, finances, polygamy and societal conflict.

Mr. Beck states that Mormons had been driven out of New York, Ohio, Missouri and Illinois. (3:35)

Nope. Joseph Smith decided to leave New York for Ohio because more members of the Church lived in Ohio and it was a stronger base for Church operation. Joseph Smith decided to leave Ohio for Missouri because his failed banking venture had resulted in numerous lawsuits from bilked investors. Joseph owed more money than he could repay, so he snuck out of Kirtland under cover of night, and headed to Missouri; faithful Church members followed him. In Missouri, as Mr. Beck said, the Mormons were forced to leave and found temporary peace in Nauvoo, Illinois. A few years later, with Brigham Young now leading the Church, the Mormons agreed to leave the state after continuing conflicts between Mormons and non-Mormons. However, according to Brigham, they already had plans in place to move west – plans they had made before any “recent disturbances” with the non-Mormons of the area.

Mr. Beck talked about the Missouri “Extermination Order” which, according to Beck, “ordered that all Mormons should be exterminated – killed – you were legally able, according to this order from the Governor, to kill a Mormon. You find out somebody is a Mormon, kill him. Or, drive him from the state.” (3:50)

The so-called Extermination Order, while definitely deplorable, was not what Mr. Beck claimed it to be. Mormons love to perpetuate this particular set of myths. In truth, Governor Boggs’ Executive Order No. 44 sought to avoid bloodshed, not legalize it. As a military order, it called for the Missouri militia to “exterminate” — that is, “remove” — Mormons from their homes and force them to leave the state. This was clearly understood in 1838. It was never “legal” to kill Mormons in Missouri.

Mr. Beck said that this was unique in American history – no one had ever been exterminated before. (3:42)

Between the years of 1830-1838 various Native American tribes had been forcibly removed from their lands at least five times. The concept of people-group removal, noted Mormon historian William Hartley, “was not new” in 1838 Missouri. 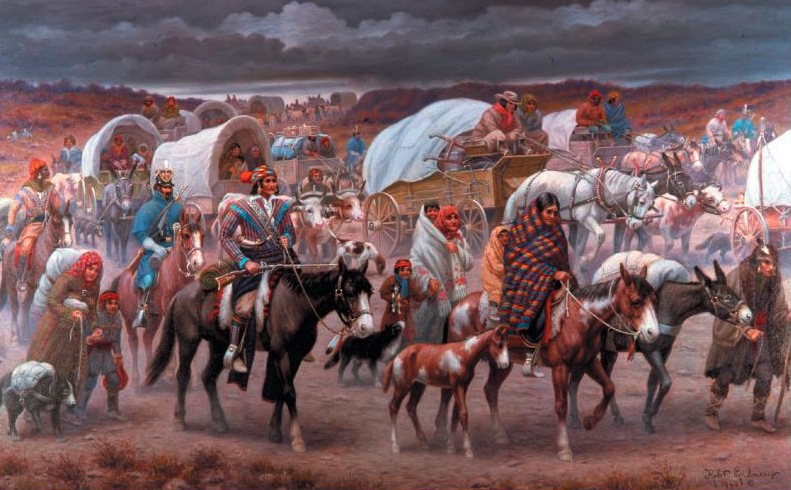 Mr. Beck said that the Mormons who lived in Caldwell County, Missouri were forced to sign over their property to the Missourians and then were ordered to pay for the military campaign against them. (4:40)

In fact, the deed of trust (for the purpose of paying the expenses of the war) signed by the Mormons after their surrender in Missouri was quickly deemed illegal and was therefore never enforced. The Mormons retained ownership of their property after the war, and many of them sold or traded it to help pay for their expenses in moving to Illinois. However, they did often sell it for much less than it was worth.

Mr. Beck said that the Mormons left Missouri for Nauvoo, “then the mobs came in and burned down that city as well.” (5:40)

Actually, “the mobs” never burned down any Mormon city. After some years in Illinois, troubles between Mormons and non-Mormons started up again, and both sides in the conflict engaged in raiding, plundering and intimidating one another. These raids included burnings of crops and outlying buildings, but the city of Nauvoo was never burned down.

When the Mormons began to leave Nauvoo, according to Mr. Beck, “most of the men were dead.” (6:00)

No, this is not true. There has never been an official accounting of the Mormons who died in the Missouri war/exodus (to the best of my knowledge, none but the Smith brothers died in the Nauvoo conflicts), but according to Mormon historical sources, the number of Mormon deaths was somewhere in the neighborhood of 50 souls. These were sad, tragic and needless deaths; nevertheless, these deaths do not represent “most of the men.” Furthermore, a few seconds after making his nonsensical claim, Mr. Beck mentioned the Mormon Battalion. If “most of the men were dead” as he claimed, where did the 500 battalion volunteers come from?

Finally Mr. Beck returned to the question of polygamy. He said, “there weren’t a lot of dudes left,” so one reason polygamy was instituted was to repopulate and to care for women and children who were left alone. (6:55)

Given the historical fact that relatively few Mormon men had died during this turbulent time, Bill McKeever asks a good question: “Are we really to believe God decided to alter the one man, one woman tradition of marriage embraced by much of the western world because fewer than a hundred women living in 19th century America lost their husbands to indefensible acts of persecution or while relocating to the Salt Lake Valley?”

Mr. Beck claimed that only 5% of Mormons practiced polygamy. (7:30)

Five percent is a great underestimate. Author B. Carmon Hardy put Mormon polygamy numbers in perspective: “Recent studies suggest that the number of Mormons living in polygamous families between 1850 and 1890, while varying from community to community and year to year, averaged between 20 and 30 percent. In some cases the proportion was higher. The practice was especially extensive with Mormon leaders, both locally and those presiding over the entire church. These calculations would indicate that, during the entire time the principle was practiced, the number of men, women, and children living in polygamous households amounted to tens of thousands” (Solemn Covenant, 17).

This Blaze TV program dedicated to the so-called dispelling of Mormon myths is so disappointing. What I’ve addressed here is not exhaustive; it does not attempt to deal with all the myths Glenn Beck perpetuated in his “myth buster” segment on polygamy. But one thing is clear: Mr. Beck really had no interest in setting the record straight. 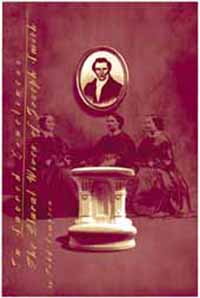 In addition to sustaining long-held, faith-promoting myths so beloved by Mormons, Mr. Beck completely ignored the doctrinal — and darker — side of Mormon polygamy. He never mentioned that Joseph Smith claimed to have received a revelation in which Mormon men were commanded to take multiple wives, and wives were commanded to accept it. Mr. Beck didn’t mention men marrying women who already had living husbands (this fact would not fit with the assertion that polygamy was instituted for the care of women who had lost their husbands). He did not mention the fact that often, plural wives were not adequately cared for by their husbands and lived in poverty while trying to support their children on their own. Mr. Beck never mentioned that Mormon leaders taught polygamy was “was a necessity to man’s highest exaltation in the life to come” (First Presidency, “Petition For Amnesty,” December 19,1891).

The LDS Church no longer allows members to practice polygamy in this life, yet it once encouraged it, while claiming God commanded it, and required obedience to it. Explaining these things to those who wonder why Mormonism and polygamy are linked together is the only way to truthfully dispel Mormon myths.

Sources and additional information (in no particular order):