It wasn’t long ago when an advertising campaign for basketball superstar Michael Jordan emphasized just three words: “Be like Mike.” The slogan became very popular and sold plenty of shoes. 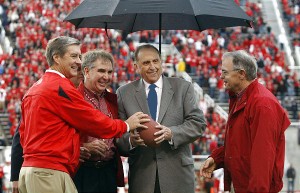 This came to my mind as I read an article titled “Follow the Prophet” in the April 2014 Ensign magazine.  Written by Seventy William R. Walker, the piece puts the LDS president on a pedestal. If the reader wanted to predict what the article would be about, the pull quote on page 39 says it all: “As we follow President Monson and try to be more like him, we will inevitably succeed in being more faithful disciples of the Lord Jesus Christ.” Somewhere I was halfway expecting another pull quote that would have read, “Be like Tom.”

Consider the points made by Walker to succeed in “following the prophet’s example”:

Toward the end of the article, Walker writes on page 41, “President Monson has taught us the way to live our lives with his wonderful and inspiring messages at general conference. He has taught us how to be followers of Jesus Christ by his remarkable and wonderful personal example. . . . As we follow him and try to be more like him, we will inevitably succeed in being more faithful disciples of the Lord Jesus Christ.”

Someone may predict that I am about to insist that it is wrong to imitate other people. That’s not my point. If a person’s walk is worthy to be imitated, then by all means it should be! For the Christian, this might be a pastor, Billy Graham, or another spiritual giant. Even Paul urged the Corinthians to “imitate me” (1 Cor. 4:16) and “follow my example, as I follow the example of Christ” (1 Cor. 11:1). In Philippians 4:17, the apostle wrote, “Join together in following my example, brothers and sisters, and just as you have us as a model, keep your eyes on those who live as we do.”

Was Paul perfect? By no means! He was a man who was transparent and even admitted to struggling with sin! (Rom. 7:7-25) Flip through the book of Acts and study how Paul handled certain situations, including a serious conflict with Peter. Read 2 Corinthians 11 and better understand the mindset of the man who told us to imitate him. There is much open transparency when it comes to the life of Paul.

Contrast Paul’s example with President Monson. Besides photo ops and generic biannual speeches at the general conferences, how much transparency is provided? Of course, there are plenty of PR pieces to make Monson look saint-like (example). And there is a 2010 biography (To the Rescue written by Heidi S. Swinton, a faithful member of the LDS Church), though the chapter titles (including “He went about doing good” and “The consummate counselor”) show the demeanor of this book. We must wonder if there really is enough information provided to give us an accurate assessment of his character. Could the image we are given be nothing more than a caricature?

Someone might say that we can learn more about the real Monson from General Conference messages that he’s given over the years. I have read or listened to many Monson addresses, and I just can’t remember a time when I heard him refer to situations where his current life or example was less than stellar. Oh, we certainly get some tales, including one that has been dubbed the “fire story.” It details a time when Monson and a friend got into trouble when they played with matches and started a fire. While this certainly was an admission of wrongdoing, I believe the narrative is presented in a way that appears innocent and cute, even if the moral of the story was to obey. (See the April 2013 account here.)

Except for certain long-ago stories like this, very little is shared at conference that provides an accurate picture of the 21st century Monson. The impression that is given—purposeful, I believe—reflects a mortal who appears to have a lock on sainthood.

We are left to wonder, does Mormonism’s top leader struggle with evil, lustful thoughts? Does he have any temptation with gossip or backbiting talk? Has he disagreed with one of his children and spoken in an angry tone? In other words—and I want to know—is Thomas S. Monson human? After reading Walker’s article, the top LDS leader appears to be a demigod who apparently walks on water. 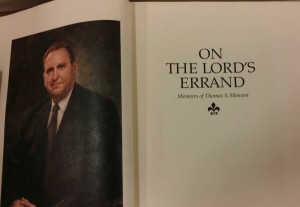 In a 1985 book titled On the Lord’s Errand: Memoirs of Thomas S. Monson that has long since been out of print, Monson reminisced about a time when he was given advice from a senior apostle. He wrote on page 184:

“In about 1956 we recognized that our neighborhood was dete­riorating. We observed this one Halloween by the nature of the people who came in the guise of ‘Trick or Treat.’ The minority elements were moving into the area where we lived, and many of the old-time families had long since moved away. Seeking coun­sel, I visited with Mark E. Peterson, who for many years had been the General Manager of the Deseret News. O. Preston Robinson, my former professor of marketing at the University of Utah, had suc­ceeded Brother Petersen as the General Manager at the News. As I mentioned to Mark my dilemma, wondering if it would be unfair for me to move, he said simply, ‘Your obligation to that area is concluded. Why don’t you build a house in my ward?’”

By telling the story, Monson doesn’t appear to have any remorse referring to human beings as “the minority element.” He doesn’t seem to feel bad that he took Petersen’s advice to move away from these “elements.” Maybe this is why the story has never made it into a conference address. At the same time, I wonder, should we consider this as an example of how we ought to “follow the prophet”?