I’ve often said that while the Mormon church claims to be the only church on the face of the earth that has the authority to speak for God, no one within it seems to speak with any authority. 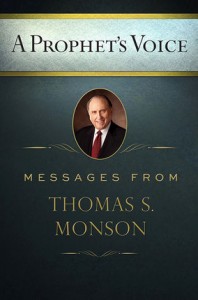 I received a phone call from my friend Russ East who drew my attention to a book titled A Prophet’s Voice: Messages from Thomas S. Monson. This book was published in 2012 by Deseret Book, a company owned by The Church of Jesus Christ of Latter-day Saints. Of course, Thomas S. Monson is the current prophet, seer, and revelator of the LDS Church. When his predecessor, Gordon B. Hinckley died, Monson was set apart as the church’s president on February 3, 2008.

Monson has spent much of his life as an employee of the LDS Church. His biography in the 2012 LDS Church Almanac says “for the 22 years prior to being set apart as 16th president of the Church on February 3, 2008, President Monson served as counselor to three presidents: second counselor to President Ezra Taft Benson, and President Howard W. Hunter and, for 13 years, first counselor to President Gordon B. Hinckley.” Considering all the years that Monson has served in leadership positions, you would think that he should be familiar with the doctrines and history of the organization he currently leads. But apparently the church-owned Deseret Book does not want you to assume that. On the copyright page of A Prophet’s Voice is a standard disclaimer that reads, “The views expressed herein are the responsibility of the author and do not necessarily represent the position of the Church or Deseret Book.” You can read the disclaimer for yourself here.

The views expressed “do not necessarily represent the position of the Church”? I can expect such a disclaimer on something written by a Mormon missionary or, for that matter a BYU professor, but Thomas Monson? It might be argued that some of the material in the book was said when Monson was a mere apostle; in the course of my 40 years of talking with Mormons, I have heard some say that only the living prophets can be trusted with absolute certainty. But wait a minute, wasn’t Paul a mere apostle when he wrote Romans, Ephesians, or Galatians? If the LDS Church is, as it claims, a restoration of New Testament Christianity, why wouldn’t an LDS apostle’s words carry the same weight as a New Testament apostle?

Many of the talks included in Monson’s book were given in general conference. Regarding such messages, Dieter F. Uchtdorf, Monson’s Second Counselor, said, “Listen to general conference with an ear willing to hear the voice of God through his latter-day prophets” (“Why do we need prophets?” Ensign, March 2012, p.5). If that was the case, there certainly seems to be no need for such a disclaimer for this section of the book.

Mormons insist that their leadership carries the same authority as prophets and apostles of the past. However, Amulek, a prophet mentioned in the Book of Mormon (Alma 11:22), said, “I shall say nothing which is contrary to the Spirit of the Lord.”

Mormonism’s founder, Joseph Smith stated, “When did I ever teach anything wrong from this stand? When was I ever confounded? I want to triumph in Israel before I depart hence and am no more seen. I never told you I was perfect; but there is no error in the revelations which I have taught” (Teachings of the Prophet Joseph Smith, p.368).

Four years before his death, Brigham Young declared, “If there is an elder here, or any member of the Church of Jesus Christ of Latter-day Saints, who can bring up the first idea, the first sentence that I have delivered to the people as counsel that is wrong, I really wish they would do it; but they cannot do it, for the simple reason that I have never given counsel that is wrong; this is the reason” (August 31, 1873, Journal of Discourses 16:161).

I find it curious that no modern Mormon prophet makes such claims for himself. Instead, there always seems to be this odor of plausible deniability. It would have been helpful if the editors at Deseret Book supplied the portions of Monson’s comments that do not represent the position of the LDS church. But then, how could they unless the editors possess an authority higher than Monson’s? You see, in Mormonism there is no higher mortal authority than the church president (at least officially). No member in the LDS Church has the authority to correct the living prophet. Joseph Smith claimed, “I will inform you that it is contrary to the economy of God for any member of the Church, or any one, to receive instruction for those in authority, higher than themselves” (Teachings of the Prophet Joseph Smith, p.21).

So why the disclaimer? If God really desires a mortal prophet to guide the people, why undermine his authority with such a statement? If his words are to be taken with caution, Mormons should not be upset when we do.

This article is reprinted from the September-October 2014 issue of Mormonism Researched.