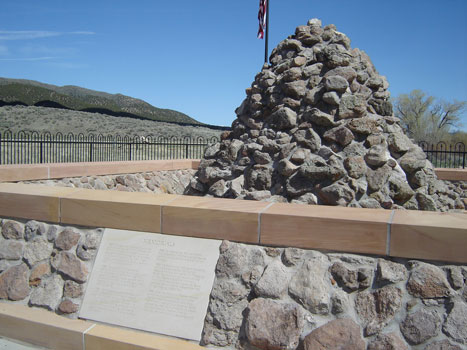 Recently, several of us at MRM took a “field trip” down to the site of the Mountain Meadows Massacre. I have been to this area probably about a dozen times since my wife and I first visited in 1977. Back then a small sign marked the dirt road leading to the hill that overlooks both the Fancher/Baker campsite and the massacre site located to its north. Thirty years ago few people had a clue as to what happened there on September 11, 1857. Many are unaware that until the Oklahoma bombing in 1995, more Americans died in the Mountain Meadows Massacre than in any other terrorist act on American soil. Even after our modern 9/11 it remains number three in American deaths. The exact number is not known, but it is generally believed that 120 men, women, and children heading to California were killed by Paiute Indians and local Mormons.

Most of the times I have visited the Mountain Meadows you can hear nothing but the wind. However, this time the silence was broken by people talking and children playing around the rock cairn that marks the graves of several massacre victims. When the film September Dawn opens, now scheduled for August 24th, I am sure its popularity will grow even more. Already the LDS Church has denounced the film as inaccurate and no doubt many of the Mormon faithful will echo that sentiment without viewing it themselves. The fact that it has been given an R rating will automatically prevent many Mormons from watching it. A word of caution to thinking LDS before they join in the chorus with their leaders. Keep in mind that most of what we know about this brutal crime comes to us by the men who committed the crime.

The common folklore is that this was an act committed by a renegade band of Mormons and that Brigham Young had no connection whatsoever. However, as Sharon noted in early February, historians familiar with the massacre don’t all agree. Three of eight historians interviewed by LDS Church-owned KSL television felt Young ordered the massacre and all eight believed he covered it up. I personally can’t see this as surprising. Anybody who studies this religion knows that Mormons rarely do anything as a group without orders from above. Does it really make sense that a group of LDS family men would savagely attack a wagon train and kill 120 people without orders from Salt Lake City? John D. Lee, a major participant in the massacre, recalls a talk he had with then Mormon Apostle George A. Smith:

“General Smith did not say one word to me or intimate to me, that he wished any emigrants to pass in safety through the Territory. But he had led me to believe then, as I believe now, that he did want, and expected every emigrant to be killed that undertook to pass through the Territory while we were at war with the Government. I thought it was his mission to prepare the people for the bloody work.”

Lee went on to say,

“I have always believed, since that day, that General George A. Smith was then visiting Southern Utah to prepare the people for the work of exterminating Captain Fancher’s train of emigrants, and I now believe that he was sent for that purpose by the direct command of Brigham Young” (Confessions of John D. Lee , 225).

I can’t even begin to imagine these men acting in such a manner without some guarantee of protection from their leaders. The fact is, Brigham Young did protect the perpetrators. For twenty years all involved kept an oath of secrecy, and when the truth became known, only one man among many, John D. Lee, was executed for the crime. Apparently the LDS Church did not think Lee’s participation was too awfully bad. Will Bagley, author of Blood of the Prophets – Brigham Young and the Massacre at Mountain Meadows, states that on April 20, 1961 “the First Presidency and the Quorum of the Twelve authorized the restoration of Lee’s membership and temple blessings.” Bagley writes that on May 9, 1961, “Apostle Ezra Taft Benson officiated in the endowment and sealing ceremonies at the Salt Lake Temple” (361).

It is customary for the LDS Church to give a blanket condemnation of anything that criticizes its history or doctrine. However, given its history of hiding documents, can we really trust such denials? If you want to know more about this American tragedy, I strongly recommend Bagley’s book.