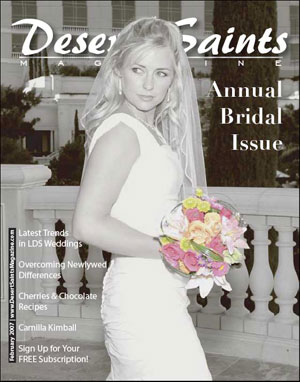 A friend from the Las Vegas area sent me a copy of a local publication, Desert Saints Magazine. According to the “Letter from the Editor” in the March 2007 issue,

“This magazine is produced by three stay-at-home LDS mothers (with contributions from two talented husbands) who are trying to do a service for the LDS community in between mothering our combined total of fourteen children, serving in church callings and running busy lives. We are faithful, good women doing what we can to further the Lord’s kingdom. We’re not perfect.”

If you think this sounds a bit defensive, you’re right. Apparently, the February issue of Desert Saints Magazine ruffled some Latter-day Saint feathers. A publisher’s note in the March issue stated,

“Concerning our February 2007 Issue cover photo, we apologize for choosing a photo where the bride’s sleeve appeared to be not temple-appropriate. We did not mean to offend our readers or imply that weddings outside the temple are ‘the latest trend in LDS weddings.'”

According to editor Danielle Ellis, she spent the month following the publication of the Annual Bridal Issue fielding phone calls and emails from people upset by the magazine’s cover which featured “a lovely bride in a short sleeve dress.” Ms. Ellis wrote:

“We apologize for running a photo where the sleeve appeared too short to be appropriate.

“All of us who looked at it saw it as a cap sleeve. In fact, as you can see from a different photo of the same bride, it is. More to the point, this beautiful, temple-worthy bride was married in the Newport Beach Temple, in this dress.

“Still, to any who were offended, we apologize for our mistake and ask for forgiveness.

“However, the complaints have given me pause. There were some extremely un-Christ-like comments directed our way, which is ironic since they were coming from ‘good members of the Church.'”

Ms. Ellis’ letter explained that, in light of the readers’ “blistering condemnations in the name of righteousness,” the March issue of Desert Saints Magazine would be focused on “Christ-like love.”

The concern of upset readers might seem inconsequential to non-Mormons. After all, the dress was modest and the bride was temple-worthy. But to many Latter-day Saints the idea of a wedding dress that hints at being outside the bounds of “temple appropriate clothing” is a serious matter.

On the LDS.org web site I found the following regulation regarding temple wedding dresses:

“Sisters may wear their wedding dresses for their temple wedding, but the dress must be white, have long sleeves, be modest in design and fabric, have no train, and be free from elaborate ornamentation.” (“Lesson 6: Preparing to Enter the Holy Temple,” Endowed from on High: Temple Preparation Seminar Teacher’s Manual, 26)

“In the temple, brides’ dresses worn during the ceremony should be long sleeved, modest, white, and not elaborately ornamented. Dresses worn in the temple should also have high necklines. Dresses with trains are not permissible in the temple, unless the trains can be removed or bustled for the ceremony.” (Shanna Butler, “Planning Your Temple Wedding,” New Era, Oct 2004, 25)

I’m not certain, given these rules, how a dress with cap sleeves is any closer to being temple-appropriate than is a dress without sleeves. But apparently it makes enough of a difference to have allowed this bride to wear her cap-sleeved gown for her Newport Beach Temple wedding.

The LDS faith system is based on grace-plus-works. Grace alone will never do; perfect obedience to all commandments and rules is imperative to achieving forgiveness for sins and, ultimately, eternal life. Consequently, dressing appropriately in the temple is of significant concern. The choice one makes represents much more than mere observation of a preferred standard. Modesty is the grace-based principle, but conformity to the rule is the works-based reality.

Desert Saints Magazine experienced the repercussions of Mormonism’s legalism, a preoccupation with form at the expense of substance. In the wedding dress incident, had there been an inch and a half more fabric over each shoulder, all would have been well. But as the magazine’s LDS readers thought the dress was sleeveless, for them, much, much more than propriety hung in the balance.

“SALVATION AND A CUP OF TEA. You cannot neglect little things. ‘Oh, a cup of tea is such a little thing. It is so little; surely it doesn’t amount to much; surely the Lord will forgive me if I drink a cup of tea.’ If you drink coffee or tea, or take tobacco, are you letting a cup of tea, or a little tobacco stand in the road and bar you from the celestial kingdom of God, where you might otherwise have received a fullness of glory?” (Doctrines of Salvation 2:16)

There is a similar danger for LDS brides wearing the wrong wedding gown. Or, at least, that’s what some Mormons fear. For in Mormonism members are taught to live by an incomplete portion of Paul’s words to the Romans:

For the wages of sin is death.

Tragically, they carry this burden through life without receiving the hope in the words that follow:

But the free gift of God is eternal life in Christ Jesus our Lord. (Romans 6:23)

Sharon surrendered her life to the Lord Jesus Christ in 1979. Deeply passionate about Truth, Sharon loves serving as a full-time volunteer research associate with Mormonism Research Ministry. Sharon and her husband live in Minnesota.
View all posts by Sharon Lindbloom →
This entry was posted in Mormon Culture, Mormon Temple, Worthiness and tagged Temple. Bookmark the permalink.