Posted on November 3, 2014 by Sharon Lindbloom

In a move that has surprised Mormons and critics alike, in mid-October the LDS Church’s Newsroom site posted a video that literally looks at Mormonism’s “Sacred Temple Clothing.” Both temple robes (the outer clothing worn by Mormons during a temple endowment ceremony, known as “the robes of the holy priesthood”), and temple garments (worn by endowed Mormons underneath regular clothing), are discussed and displayed. 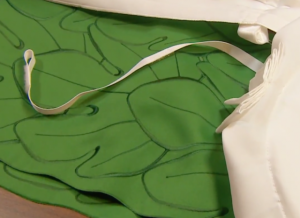 The video builds a context of various world religions and their uses of religious vestments, gestures, and rituals in which to frame Mormonism’s temple clothing.

“The nun’s habit. The priest’s cassock. The Jewish prayer shawl. The Muslim’s skullcap. The saffron robes of the Buddhist monk. All are part of a rich tapestry of human devotion to God.”

The video suggests another superficial parallel, one between Mormon temple robes and the Bible:

“The simple vestments combine religious symbolism with echoes of antiquity reflected in ancient writings from the book of Exodus.”

The video explains that Mormon temple garments (that are sometimes referred to as “magic underwear”) have “deep religious significance” to Latter-day Saints and represent “the sacred and personal aspect of their relationship with God and their commitment to live good, honorable lives.” 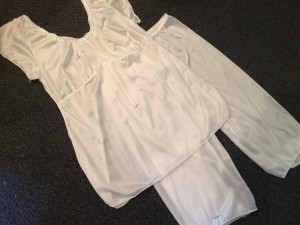 The video states that temple garments are “similar in design to ordinary modest underclothing” yet neglects to mention that Mormon garments are distinct in that they are made with Masonic-like markings sewn into the cloth. In the Church’s video these markings are indistinguishable, but in this photo of women’s temple garments (at right) the sewn-in white markings have been highlighted in red to make them visible for the photo.

The video does not explain this, but the four markings on the temple garment correspond to markings also found on the veil in the temple endowment ceremony. On the garment they are “the mark of the square” (over the right breast), “the mark of the compass” over the left breast, “the navel mark” over the navel, and “the knee mark” over the knee cap of the right leg (the compass, square and level are prominent symbols used in Freemasonry). According to the Church’s Handbook of instructions for bishops and stake presidents, it is these markings that make the temple garment sacred.

The video states, “there is nothing magical or mystical about temple garments,” but avoids any discussion of the “protective” nature of these garments – another attribute that sets temple garments apart from spiritually significant clothing worn in other religions. Mormon assertions of the garments’ supernatural protection have led to the common (but disrespectful) nickname of “magic underwear,” an offensive reference to the sacred clothing that the video hopes to squelch. The official Church Handbook explains that properly worn temple garments protect members from “temptation and evil,” but members themselves believe the garments also protect them from physical harm, freely testifying of times when the garments have saved them from injury and death.

Another aspect of Mormonism’s sacred temple clothing that is unique in the greater context of world religions and their religious vestments is the specificity of official mandates that come with owning and wearing temple garments. The Church Handbook provides these explicit instructions:

Wearing and Caring for the Garment

Church members who have been clothed with the garment in a temple have taken upon themselves a covenant obligation to wear it according to the instructions given in the endowment. When issuing temple recommends, priesthood leaders should teach the importance of wearing the garment properly. Leaders also emphasize the blessings that are related to this sacred privilege. These blessings are conditioned on worthiness and faithfulness in keeping temple covenants.

The garment provides a constant reminder of the covenants made in a temple. When properly worn, it provides protection against temptation and evil. Wearing the garment is also an outward expression of an inward commitment to follow the Savior.

Endowed members should wear the temple garment both day and night. They should not remove it, either entirely or partially, to work in the yard or for other activities that can reasonably be done with the garment worn properly beneath the clothing. Nor should they remove it to lounge around the home in swimwear or immodest clothing. When they must remove the garment, such as for swimming, they should put it back on as soon as possible.

Members should not adjust the garment or wear it contrary to instructions in order to accommodate different styles of clothing. Nor should they alter the garment from its authorized design. When two-piece garments are used, both pieces should always be worn.

The garment is sacred and should be treated with respect at all times. Garments should be kept off the floor. They should also be kept clean and mended. After garments are washed, they should not be hung in public areas to dry. Nor should they be displayed or exposed to the view of people who do not understand their significance.

To dispose of worn out temple garments, members should cut out and destroy the marks. Members then cut up the remaining fabric so it cannot be identified as a garment. Once the marks are removed, the fabric is not considered sacred.

To dispose of worn-out temple ceremonial clothing, members should destroy the clothing by cutting it up so the original use cannot be recognized. (LDS Church Handbook of Instructions, Handbook 1, Stake President and Bishops 2010, page 15)

It has been noted on various online forums that the fact that Mormons wear religious clothing is not “weird.” Even the form that this clothing takes (i.e., underwear) is not really noteworthy. But “cultic weirdness” comes into the picture via the fact that if you are an endowed adult Mormon “someone else is telling you what sort of underwear you should be wearing, when you must wear it, how you must wear it, and when you are not worthy enough to wear it. And [then] checking up on whether or not you do as you are told. That’s the cultish part.”