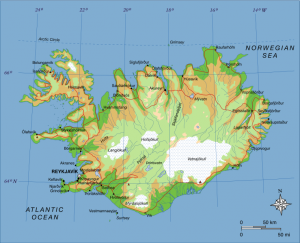 In 1960, Nobel Prize winner Halldor Laxness published a book of fiction that centered on an Icelandic man who converted to Mormonism in the mid-19th century. In the summer of 2009, I visited Laxness’ home (now a museum) outside of Reykjavik, Iceland. While there, I bought an English edition of that book, Paradise Reclaimed, and read it after returning home. Therefore, I was very interested when Mormon Times ran an article about Laxness and Paradise Reclaimed.

The article at Mormon Times is titled, “The real story of Mormonism in Iceland collides with fiction.” It outlines Laxness’ visits to Utah and other times his life intersected with Latter-day Saints, as well as the history of Icelandic Mormons. When I initially read the article at the end of June (2010), I was troubled by the article’s assertion that Icelanders who had converted to Mormonism in the mid-1800s were “expelled from Iceland.” That didn’t ring true to me, so I contacted an Icelandic historian in Reykjavik and asked if converts to Mormonism had ever been “expelled from Iceland because of their conversion to the [LDS] church.” She replied,

“No one has ever been expelled from Iceland because of his or hers faith, except for a Catholic bishop or two, who were not to the taste of the Danish king in the 16th century. No written records or evidence relate to Mormons being ‘expelled’ from Iceland at any time. They may have left for the States because they did not like the environment or their neighbours, but so did a lot of people in the 19th century. Religious freedom was granted in Iceland in 1874, but the wast [vast] majority of people were Lutheran and still are. No mentioning of any cruelty to those few Catholics or Mormons who lived here in the 19th century, but in a small society it may always be difficult to be different.” (Private email date July 4, 2010)

I have read so many exaggerated, embellished, and downright fictional accounts of persecution against Mormons and Mormonism that I’ve grown quite weary of it. Perhaps it seems like a small thing, that it doesn’t really matter whether Mormon converts were “expelled from Iceland” or they chose to leave in order to “gather to Zion.” But my friends, if it doesn’t matter, why do LDS sources continually bring it up in their lectures, sermons and books?

It matters to Mormons. I tend to think Mormons love to think they are hated. If early converts are believed to have suffered for their commitment to the LDS Church, modern testimonies are strengthened and “investigators” are convinced. Where is the faith-building element to be found in a common 19th century immigration to America, if the story does not include forced expulsion from home and country? Where is it found in a typical wagon train of American pioneers traveling to the western reaches of the United States, if the story is not wrapped in extreme proportions of suffering and death? Where is it found in the frequent 19th century use of frontier justice, if the story is not shrouded in shameful tales of rape and murder?

I was surprised to find that, sometime after its initial posting, the Mormon Times article was edited. The original assertion that converts were “expelled from Iceland because of their conversion to the church” had been removed. I applaud the Mormon Times editor who made that call; if only corrections like this (or better yet, fact-checking before publication) would become the norm rather than being the exception. Deseret News ran an announcement on June 14th (2010) that, as of this writing, is still online. It perpetuates the same inaccuracy Mormon Times corrected. It says,

“Spanish Fork was the first Icelandic settlement in the United States, after Icelanders who joined the Mormon church were expelled from that country, said [Icelandic] association [of Utah] spokesman Glenn Grossman.”

To me, if a religion cannot stand on truth, it is worthless. To remain viable, Mormonism (apparently) needs a false history that can be used to manipulate the emotions of its followers. To enhance the value of belonging to the LDS Church, Mormons (apparently) need to believe they have been–and are–hated and maligned more than any other people. Is this sort of foundation–faith and history buoyed by exaggeration, embellishment, and fiction presented as truth–an exemplary characteristic of God’s one true church?

Friends, the house of Mormonism is built on sand, as is the faith of those who embrace it. When the floods come, it will all surely be swept away. The wise man, one who values truth, builds his house on the Rock (Matthew 7:24-27). God’s story does not need fictional enhancement to prop it up; His truth will set you free (John 8:32).

Sharon surrendered her life to the Lord Jesus Christ in 1979. Deeply passionate about Truth, Sharon loves serving as a full-time volunteer research associate with Mormonism Research Ministry. Sharon and her husband live in Minnesota.
View all posts by Sharon Lindbloom →
This entry was posted in Mormon Culture and tagged History, Iceland, Truth. Bookmark the permalink.

43 Responses to Mormon Story of Icelandic Persecution Collides with Fact