What I Learned on My Visit to Old Mormon Nauvoo

A few weeks ago I visited The City of Joseph: Nauvoo, Illinois. It was quick trip; I was only able to spend two days in the area, hurrying from place to place in an effort to do some primary source research. I had little success regarding the event on which I sought information, but I did learn a few unrelated things.

My travelling companion and research assistant was a former Mormon who was visiting these sites for the first time as a Christian. I daresay she learned more than I did at the Land and Records Office as she came face-to-face with the truth of Nauvoo polygamy — a very different story than she had been taught as a Mormon.

I have been to Nauvoo and visited these sites so often that it is rare for me now to hear anything new. But on this trip…

At the Carthage Jail Visitors Center I learned:

• Following the shootings of Joseph and Hyrum Smith, 300-pound Willard Richards, knowing he would be killed, placed his considerable bulk in the doorway of the “martyrdom room” to protect the body of Hyrum from would-be body-snatchers. (Apostle Richards was not killed and the body snatchers never materialized.)

• A missing piece of the original door to the “martyrdom room,” significant for containing the bullet holes from the first shots fired in the 1844 attack, was discovered in a shed after the Mormon Church purchased the Jail building in 1903. God had miraculously preserved it to one day stand as a witness to the martyrdom.

• My honest answer (“No.”) to the question, “Do you feel the Spirit here?” at the end of the Jail tour was unacceptable. The LDS missionary guide made it clear that the Spirit most certainly was there, and my inability to feel it was my own fault.

At the LDS Land and Records Office I learned:

• In 1840s Nauvoo, Mormons did proxy work (for the dead) for those of the proxy’s own gender, and surprisingly, also for the dead of the opposite gender.

• My former Mormon companion learned that some Mormon women in Nauvoo were married to more than one living man at a time. (Even after 20 years of active membership in the Mormon Church, this information was a genuine shock to her.)

• One of the stone carvers for the original Nauvoo Temple, David Clark, was baptized in Nauvoo by Joseph Smith and later went west with the main body of Latter-day Saints. While living in Utah Territory he left Mormonism and converted to the Reorganized Church of Jesus Christ of Latter-day Saints (now named Community of Christ). David stayed in Utah and, upon his death, was buried in Lehi.

Leaving the Land and Records Office, I went across the field to the Joseph Smith Historic Site Visitor Center (Community of Christ) where I learned:

• The missionary guide on duty there was a descendent of the aforementioned David Clark. (Insert Twilight Zone theme song here.) The Community of Christ guide liked to think that Joseph Smith’s son, David Hyrum, might have converted his ancestor from the LDS Church to the True Church during David’s 1869 mission trip to Utah.

• The actual reason Emma Smith staged a mock public burial of Joseph and Hyrum while hiding their real bodies, was so that Brigham Young could not get his hands on them; the claim that she was worried about the graves being desecrated was merely a handy excuse. 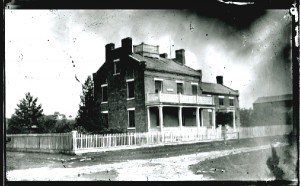 While all of this was interesting to learn, the new information that made the strongest impression on me was that presented at the Heber C. Kimball Home historic site. As we took the tour of this site, led by a senior sister missionary from the Mormon Church, I learned:

• Though the Church has officially published information about Nauvoo polygamy in its online essay, the approved scripts for the historic tours in Nauvoo have not changed. The tours still shun any mention of plural marriage, even though polygamy was practiced at many of these sites in the 1840s. (Some of the tour guides will talk about it if asked directly, depending on how comfortable they are with going off-script.)

• Heber C. Kimball hated the idea of polygamy and vigorously resisted it due to his great love for his legal wife, Vilate. (Yet this Mormon apostle married 36 plural wives during a 4-year span in Nauvoo, and gave his 14-year-old daughter, Helen Mar Kimball, to Joseph Smith as the Prophet’s 25th plural wife. Eventually, Heber Kimball’s number of wives reached 44.)

• Many Mormons are troubled by the Church’s history of polygamy. But all one must do is remember the Book of Mormon is true and put the issue of polygamy “on the shelf.”

• Heavenly Father was once mortal, and this fact is what gives Mormons hope.

• Heavenly Father has many wives, proven by the fact that there are so many different races in the world.

Most of what I learned on my short visit to Nauvoo would not be embraced by Mormons as “official” doctrine or teachings, and I would agree that no religion should be judged solely by anecdotal accounts. Even so, there is surely some reason these people believe what they are telling visitors to these historic Mormon sites, and some reason they believe these things are important enough to share. Therefore, it seems that no matter how many times I visit Nauvoo, I will always learn something new.