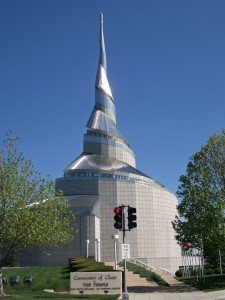 The Community of Christ Temple in Independence, Missouri

On a recent visit to Kansas City I stopped in Independence, Missouri. It was a beautiful spring day, so I took a short stroll covering approximately a five-block area near the LDS Visitors Center. Of course, the Community of Christ’s temple dominates the landscape, but the small area is further dotted with churches that spring from Joseph Smith and the Book of Mormon.

The Community of Christ used to be known as the Reorganized Church of Jesus Christ of Latter Day Saints. It once claimed to be the “one true church” but has lately chosen a more ecumenical perspective. It is about this church that LDS President Joseph Fielding Smith said, “The truth is that the founders of the ‘Reorganized’ church were the ones who followed every will-o-the-wisp, bowed the knee to Baal, and departed from the faith. …the pretentions of the ‘Reorganized’ church are fraudulent. Judged by its history, doctrines and the unstable character of its founders, it is proved to be a counterfeit and nothing more” (Doctrines of Salvation, 1:248, 253). 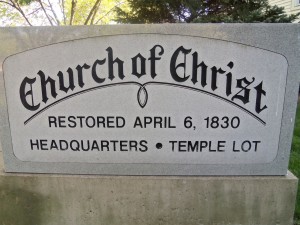 The Church of Christ (Temple Lot) in Independence, Missouri

The Church of Christ (Temple Lot) says of itself, “The Church of Christ is the true Church restored in the last days by Christ himself to prepare the world for His final return. Organized by His divine revelation and patterned after the primitive New Testament Christian Church, the Church of Christ possesses true priesthood authority and spiritual gifts given by Christ…” This church clearly and unapologetically claims the Mormon Church is apostate. “The Church of Christ grew rapidly as the gospel was spread and was accompanied by the power of the Holy Ghost and with miracles. Unfortunately the devil was also hard at work at this time, trying to destroy the Church from without and within …in short order there were ideas and doctrines introduced which were not a part of the Gospel of Christ. …These doctrines included the consolidation of power into the hands of one man as ‘Prophet’ (not unlike the Pope) the offices of a High Priest and a First Presidency, the practice of baptism for the dead, the belief in a changeable God and the mysticism of Free Masonry. The name of the Church had even been changed to the Church of Jesus Christ of Latter-day Saints.” 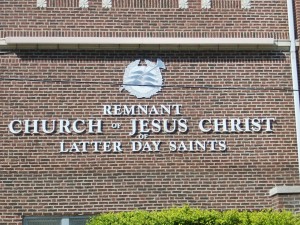 The Remnant Church of Jesus Christ of Latter Day Saints in Independence, Missouri

The Remnant Church of Jesus Christ of Latter Day Saints claims, “From its restoration in 1830 thru the Reorganization of 1860 and Renewal in 2000 the Remnant Church has remained the true successor of Christ’s New Testament Church.” This church believes the Community of Christ “has turned aside from some of the most basic beliefs of the Restored Gospel,” and that the Utah Mormon Church holds to “many spurious doctrines such as progression, multiplicity of gods, Adam as a god, polygamy, and many unscriptural temples ordinances foreign to the Bible, Book of Mormon, and Latter Day Revelation given through Joseph Smith Jr. and his true successors in office.” 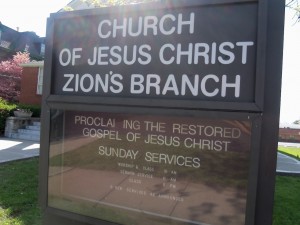 The Church of Jesus Christ (Zion's Branch) in Independence, Missouri

The Church of Jesus Christ (Zion’s Branch) says in its Statement of Purpose, “We believe and are prepared to defend the Church of Jesus Christ as restored in 1830, and according to the covenants and commandments of God at its Reorganization in 1860, which today exists only where the servants of God have disassociated and abstained from the ordinances by that organization which once bore the name of Christ in purity, but now finds itself apostate and abhorrent in the sight of Almighty God” (Steven Shields, Divergent Paths of the Restoration, 291). 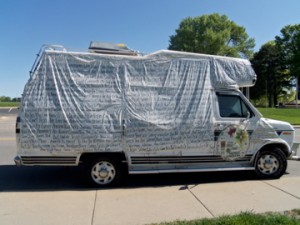 A Restorationist Camper in Independence, Missouri

This camper with Missouri plates was parked on the street near the Church of Christ (Temple Lot). Covered with writing, it was difficult to determine which religious group it represented, but its abundant quotes from the Book of Mormon coupled with doomsday warnings would seem to indicate yet another restorationist follower of Joseph Smith. 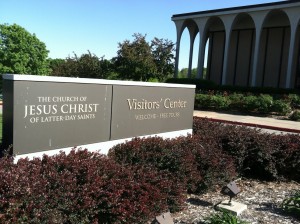 The Church of Jesus Christ of Latter-day Saints Visitors Center in Independence, Missouri

The Church of Jesus Christ of Latter-day Saints joins the crowd of “true churches” clustered on this small piece of real estate. This church also claims to be the real–the only–restoration of Christ’s New Testament church. But each of these other churches pictured above (along with many, many others that continue to grow out of Joseph Smith’s teachings) might be pleased to turn Joseph Fielding Smith’s words back on himself and his own LDS church: “the pretentions of the [Mormon] church are fraudulent. Judged by its history, doctrines and the unstable character of its founders, it is proved to be a counterfeit and nothing more” (Doctrines of Salvation, 1:253).

Those who believe Joseph Smith was a true prophet are in a quandary. They very well may personalize Joseph Smith’s own dilemma: “In the midst of this war of words and tumult of opinions, I often [say] to myself: What is to be done? Who of all these parties are right; or, are they all wrong together? If any one of them be right, which is it, and how shall I know it?” (Joseph Smith—History 1:10).

Friends, “join none of them…they teach for doctrines the commandments of men” (Joseph Smith—History 1:19). Instead, open your Bibles and seek the One who is the Way, the Truth and the Life.

30 Responses to A Mormon Denominational Walkabout