Do Mormon Apostles Believe in the Restoration? 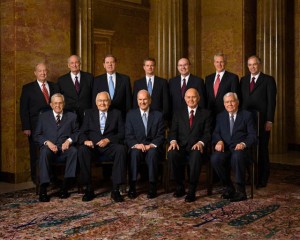 A little over a week ago (on April 6, 2013) Christopher Ralph at the Journey of Loyal Dissent blog posted a controversial memorandum written by author and historian Grant H. Palmer. The memo recounts details from Mr. Palmer’s “Three Meetings with a LDS General Authority, 2012-2013.” The information Mr. Palmer relates could be powerfully damaging to Mormonism. It’s so shocking that it has many people asking, “Is it true?”

I have no reason to doubt Mr. Palmer; he has shown himself to be a man of truth and integrity. But I don’t know the character of either the Seventy or the returned Mission President who have been meeting with Mr. Palmer. Are they on the level?

Let’s assume for the time being that everything Mr. Palmer was told is true. In a nutshell, then, that means

For the Christians here at Mormon Coffee this information may be somewhat surprising; however, it does not change our convictions about Mormonism in any way. But what does this mean for Mormon readers?

If these things told to Grant Palmer are true, Mormon friends, do they affect your convictions about Mormonism? Assuming the truth of these claims for the sake of discussion, does it matter to you that every prophet, seer and revelator in the Mormon Church knows Joseph Smith is a false prophet, the First Vision never happened, and the Book of Mormon is not truly another testament of Jesus Christ?

87 Responses to Do Mormon Apostles Believe in the Restoration?