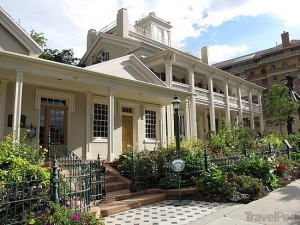 On June 19, 2014 I visited Utah and took a tour of the Beehive House, Brigham Young’s principal residence in Salt Lake City. Guided through the 1854 home by two young sister missionaries, I learned a lot about the comfortable pioneer life enjoyed by Mormonism’s “Lion of the Lord” during the second half of the 19th century. However, much of what I learned was not true. For example, I was told that:

In case you’re wondering, during my tour I didn’t challenge the sister missionaries about their misinformed history; I imagine they were just repeating what they have been told. But here’s the thing I struggle with. The Mormon Church knows its history. Given that, it seems to me that the Church can choose one of three options:

The Church has chosen the third option. Why? It could choose to act faithfully, but instead has chosen that which is an abomination to the Lord (Proverbs 12:22).

Why has the Mormon Church made such a bad choice? Why does it choose to cast its lot among the wicked?