Are you ready to engage Mormons for Christ? 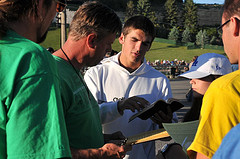 The Mormonism Research Ministry website is filled with resources to help people gain a broader understanding of the Mormon Church, including its doctrines and history. The website also offers resources to help Christians prepare to reach out to Mormons or those investigating Mormonism. Among other things, MRM has prepared pdf files of three “Redi-references” that can be printed out and placed in a Bible or in Mormon books, ready and handy to help you quickly find the verse references or page numbers of issues you would like to discuss with your friends.

The Book of Mormon Redi-reference lists (among other things) several areas in which the Book of Mormon disagrees with current Mormon doctrines, providing “addresses” where these contrary teachings can be found. For example,

The Book of Mormon teaches God is unchangeable, not a former human being-

The Doctrine and Covenants Redi-reference alphabetically lists over 40 problematic Mormon teachings, false prophecies and contradictions found in this book that Mormons consider scripture. For example,

The Miracle of Forgiveness is described by Bill McKeever as “one of the best books written by an LDS general authority that clearly exposes Mormonism as non Christian.” The Miracle of Forgiveness Redi-reference compiles over 30 traditional Mormon teachings found in the book. These can be used to help Mormons understand that the Mormon “gospel” system for forgiveness is really an impossible gospel. For example,

Lest anyone misunderstand, MRM does not provide these Redi-references (or any other information) merely to be argumentative. As Eric Johnson explains,

“The main topic on mrm.org is dealing with the topic of Mormonism from a biblical point of view. It may sound to some that we are ‘anti’ Mormons and hate them. This is not the case. We just don’t believe Mormonism is true, which is why we do our best to present the evidence to support our position. At the same time, our goal is not to get someone to leave Mormonism and then head toward atheism or agnosticism. There really is a Jesus who loves His people very much! He desires a relationship, which is why Jesus came to this earth and became a man so He could die for our sins.”

Though not a Redi-reference, at this MRM webpage Eric lists 10 reasons why a person ought to consider becoming a Christian. Please visit the page and consider these reasons – either for yourself, or to share with and challenge others.

Christians, be ready for every opportunity–and may God be glorified.

Sharon surrendered her life to the Lord Jesus Christ in 1979. Deeply passionate about Truth, Sharon loves serving as a full-time volunteer research associate with Mormonism Research Ministry. Sharon and her husband live in Minnesota.
View all posts by Sharon Lindbloom →
This entry was posted in Bible, Book of Mormon, D&C and Pearl of Great Price, Friendship, Interaction, and Evangelism, Mormon Scripture, Nature of God and tagged Book of Mormon, Church of Jesus Christ of Latter-day Saints, Doctrine and Covenants, Evangelism, LDS Church, Miracle of Forgiveness, Mormon Church, Mormon Scripture, Mormonism. Bookmark the permalink.

32 Responses to Are you ready to engage Mormons for Christ?