Posted on October 5, 2015 by Sharon Lindbloom 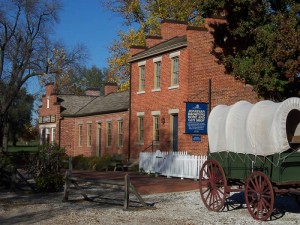 Nauvoo, Illinois, the city the Mormons built, was thriving and growing in the 1840s. The population was such that Nauvoo rivaled Chicago for “biggest city in Illinois.” Most visitors to today’s restoration of historic Nauvoo will learn that fact, perhaps from several different Mormon tour guides. One statistical comparison that isn’t mentioned, however, is that in the fall of 1845, Nauvoo’s violent crime rate very likely surpassed that of Chicago.

In 1845, crime in Chicago was such that the city had only four men responsible for keeping the peace: one marshal and three assistants; whereas the Nauvoo police force, in January of 1845, numbered 500 men. While there were extenuating circumstances in Nauvoo necessitating a high number of peacekeepers, in the fall of 1845 Nauvoo’s policemen were often the source of violent crime.

In his book, One Nation Under Gods, Richard Abanes details some of these events from September and October of 1845. He writes,

“A halt to the violent conflict between Mormons and anti-Mormons lasted but a brief period of time after Smith was killed. Armed mobs of Illinoisans, incited by endless newspaper articles covering Mormon issues, soon began to conduct raids against isolated church settlements. Saints were threatened, LDS homes were burned, rumors about various Mormon atrocities circulated, and militias were called out by the governor. Church dissenters and critics, meanwhile, continued to expose aspects of Mormonism that church leaders did not want revealed. The Saints retaliated with verbal intimidation, religious condemnation, and acts of physical violence… More disturbing were the many murders, vicious beatings, and intimidating assaults perpetrated by the Nauvoo police against perceived enemies of the church. Policeman Alan J. Stout summed up the rational of the Saints on these matters, explaining that to his mind such activity was nothing more than avenging the blood of Joseph and Hyrum. In reference to the Mormon dissenters remaining in Nauvoo, Stout expressed a common sentiment: ‘I feel like cutting their throats.’” (210-211)

Mr. Abanes continues his narrative by describing specific acts of violence perpetrated by the police and other Mormon enforcers during 1845. Using Mr. Abanes’ book (and consulting a few others), I here list ten of these violent crimes from September 1845.

Nauvoo’s bloody autumn of 1845 could have been much worse, but as it was, it clearly demonstrated that the Mormons and non-Mormons of Hancock County would never learn to live together in peace. “Therefore,” wrote Brigham Young, “we propose to leave this county next spring, for some point so remote, that there will not need to be a difficulty with the people and ourselves…” The following February the Saints began their long journey to Utah Territory; and though the territory was remote, difficulties between Mormons and non-Mormons did not cease for long.