I looked out the window and what did I see?

Posted on November 5, 2015 by Sharon Lindbloom 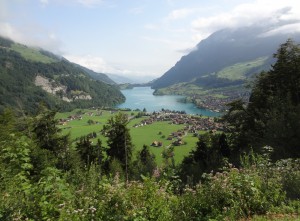 One morning I watched out the window of our tour bus as we headed away from the incredibly beautiful village of Interlaken. As we were leaving the freeway and beginning our ascent to go up and over the mountain, my fellow travelers were just finishing up a discussion about Gypsies. When the bus rounded a curve we came upon a group of teenaged kids at the side of that mountain road. They looked a bit like Gypsies, pushing and pulling their earthly goods heaped into two-wheeled carts. Everyone gawked at them as the bus drove slowly by, while our guide made sure we knew that these were, in fact, not Gypsies. Shaking her head, she kept incredulously repeating, “I don’t know what that is!”

But I knew. It was a group of Mormon kids doing a handcart trek, their handcarts piled high with clothing and camping gear. Right there in the middle of the Swiss Alps unenthusiastic, dazed-looking kids were reenacting the American Mormon Handcart Experience in the gathering summer heat.

I wonder. If these Swiss kids knew about these other Mormon historical events, would they consider reenacting them as well?

20 Responses to I looked out the window and what did I see?