LDS Apostle Accused of Deception in Defense of Marriage 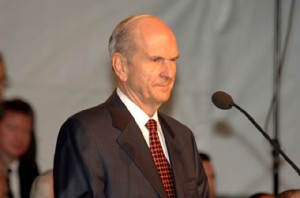 Last April I blogged about the recent temple wedding of LDS Apostle Russell M. Nelson (see Wedding Bells for LDS Apostle). I made note of the fact that Mr. Nelson, whose first wife died in 2005, was on his second temple marriage (for time and all eternity) and asked,

So the question is, according to LDS beliefs, doesn’t this mean Mr. Nelson will be a polygamist in heaven?

Furthermore, isn’t he a polygamist now though he is currently only living with one of his two wives?

Therefore, I was struck by yesterday’s news report from KUTV out of Salt Lake City: “Petitioner Angry Over ‘Celestial’ Polygamy.”

Apparently, there is now an online petition calling for the elimination of Apostle Nelson’s name from the Letter from America’s Religious Leaders in Defense of Marriage produced by the Religious Coalition for Marriage (see Mormon Church Joins Coalition in Defending Marriage).

The basis for the protest is this:

The petition is posted on a web site started by a gay, ex-Mormon activist, whose objection is based on a section of church doctrine that says Mormon men can have multiple wives in heaven. According to the web site, Russell M. Nelson – a widower who recently remarried – believes in religious polygamy and therefore has no business promoting monogamy…

“It is deceptive of Elder Nelson to sign a petition that defines marriage as the union between one man and one woman when he practices a theology that extends the name ‘marriage’ to a union between a man and multiple women,” [Connell] O’Donovan’s petition states.

After giving a brief history of polygamy within the LDS Church, the KUTV report included comments from an excommunicated LDS historian:

As a religious doctrine,…the principle remains unequivocally in place, said Mormon historian and author D. Michael Quinn, who has written extensively about polygamy.

“All of (Mormon church leaders) affirm that sealings that are between righteous men and women and where there has been a death, that those sealings triumph over death,” said Quinn. “There is no retreating from that position. That is an essential doctrine.”

Responding to the story, several people left interesting comments at topix.net. Under the name of Logic please someone who appears to be a Mormon wrote,

Except for the fact that two concurrent marriages while both wives are still alive is currently not allowed in the LDS church. The protester seems to have forgotten this issue. Nelson and the coalition are attempting to define marriage “in this life” and “in this country” not for the eternities, which is in the realm of an altogether different government.

Logic, please look up an informal logical fallacy called, “missing the point.” You just committed it. It is hypocritical for a man who believes he is married to two women *at the same time* to sign a petition to define marriage as something between ONE man and ONE woman. It matters not that one of those women is dead. Elder Nelson believes he is married to both of them now.

That is the point.

Sharon surrendered her life to the Lord Jesus Christ in 1979. Deeply passionate about Truth, Sharon loves serving as a full-time volunteer research associate with Mormonism Research Ministry. Sharon and her husband live in Minnesota.
View all posts by Sharon Lindbloom →
This entry was posted in Uncategorized and tagged Marriage, Polygamy, Russell M. Nelson. Bookmark the permalink.