“What do Mormons believe about the Bible?”

The Mormon Church appears to be updating its FAQ section at Mormon.org. I’ve received several Google Alerts highlighting specific Frequently Asked Questions and their official answers. One recent Alert pointed me to the FAQ section on the Bible, to the question, “Do Mormons regard the Bible as Holy Scripture and the word of God?” Another FAQ in this section is very much the same: “What do Mormons believe about the Bible? Do they regard it as Holy Scripture and the word of God?” The answers provided for these questions, though different, communicate basically the same thing:

“Mormons believe, revere and love the Holy Bible. We see it as a powerful, important, and sacred holy record which serves as the bedrock of all Christianity. The Bible is rich in history, doctrine, stories, sermons and testimonies, all of which witness that Jesus Christ is the Divine Son of our Heavenly Father. The Bible is the word of God and came from the writings of holy men of God as they were moved upon by the Holy Ghost (see 2 Peter 1:20-21). Through the same process we have additional Holy Scripture, including the Book of Mormon, which supports and exalts the Bible.” (“Do Mormons regard the Bible as Holy Scripture and the word of God?”)

This response pointedly addresses both parts of the question. And while the general answers provided in the FAQ section appear to be designed to be short and to the point, this answer goes beyond the question and provides the additional information that Mormons also accept other books as Holy Scripture. The answer to the similar FAQ question (noted above) does the same thing, and includes a list of these additional scriptures with a short explanation of what they are.

So this leaves me with a question of my own: Why do these official responses to questions about the Mormon view of the Bible fail to include the doctrine so clearly spelled out in the Articles of Faith; that is, “We believe the Bible to be the word of God as far as it is translated correctly” (Articles of Faith 1:8; emphasis added)? It is true that the Articles of Faith can be found elsewhere on the Mormon.org website, yet failing to mention that particular canonized doctrinal caveat renders the response provided by the Mormon Church incomplete at best.

The following quotes from faithful Mormon sources will allow the reader to reach a better-informed conclusion about Mormonism’s regard for the Bible.

“There are many things in the Bible which do not, as they now stand, accord with the revelations of the Holy Ghost to me.” (Joseph Smith, Teachings of the Prophet Joseph Smith, 310)

“The Bible, as it has been transmitted over the centuries, has suffered the loss of many plain and precious parts.” (Presidents Ezra Taft Benson, Gordon B. Hinckley, and Thomas Monson, “Letter Reaffirms Use of King James Version of Bible,” Church News, 6/20/1992, 3)

“The words contained in this Bible are merely a history of what is gone by; it was never given to guide the servant of God in the course he should pursue…” (Orson Hyde, Journal of Discourses 2:75)

“What shall we say then, concerning the Bible’s being a sufficient guide? Can we rely upon it in its present known corrupted state, as being a faithful record of God’s word?… Add all this imperfection [i.e., lost books and “mutilated, changed and corrupted” text] to the uncertainly of the translation, and who, in his right mind, could, for one moment suppose the Bible in its present form to be a perfect guide? Who knows that even one verse of the Bible has escaped pollution, so as to convey the same sense now that it did in the original?” (Orson Pratt, Divine Authenticity of Book of Mormon, No. 3, “The Bible and tradition, without further revelation, an insufficient guide,” 47)

“The Book of Mormon is translated correctly because an unlearned man did it by the gift and power of God. It took him less than sixty translating days. The Bible abounds in errors and mistranslations, in spite of the fact that the most learned scholars and translators of the ages labored years on end over the manuscripts of antiquity to bring it forth.” (Bruce R. McConkie, “The Bible: A Sealed Book,” a BYU speech given to LDS Seminary and Institute teachers, August 1984)

“The fragmentary nature of the biblical record and the errors in it, resulting from multiple transcriptions, translations, and interpretations, do not diminish our belief in it as the word of God ‘as far as it is translated correctly.’” (Joseph Wirthlin, “Christians in Belief and Action,” Ensign, General Conference edition, 11/1996, 71)

“Unlike the Bible, which passed through generations of copyists, translators, and corrupt religionists who tampered with the text, the Book of Mormon came from writer to reader in just one inspired step of translation.” (Ezra Taft Benson, “The Book of Mormon – Keystone of Our Religion,” Ensign, 10/2011, 55)

“From these statements of the Prophet we can ascertain more clearly the meaning of the eighth article of faith, part of which reads, ‘We believe the Bible to be the word of God as far as it is translated correctly’ (Articles of Faith 1:8). Here the word translated appears to be used in a broader sense to mean transmitted, which would include not only translation of languages but also copying, editing, deleting from, and adding to documents. The Bible has undergone a much more serious change than merely translation from one language to another.” (BYU Professor Robert J. Matthews, A Bible! A Bible!, 72. Italics in original)

“In a vision of the future, Nephi sees the Bible going ‘forth from the Jews in purity, unto the Gentiles, according to the truth which is in God.’ But the Gentile church takes away ‘from the Gospel of the Lamb, many parts which are plain and most precious.’ The Book of Mormon, in other words, declares the Bible to be deficient.” (Richard L. Bushman, Joseph Smith: Rough Stone Rolling, 100) 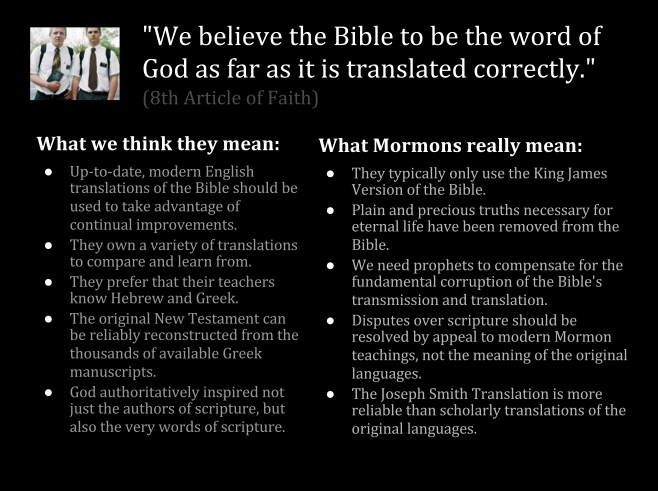 23 Responses to “What do Mormons believe about the Bible?”