Mormons Study a New Testament in 2015

The Mormon Church’s Sunday School course of study for 2015 is the New Testament. Accordingly, Gig Harbor, WA newspaper columnist Alfred Gunn (LDS) wrote a column for The Peninsula Gateway titled, “The Bible as a treasured course of personal study.”

For the most part, the article seems aimed at convincing non-Mormons that Mormons love the Bible and hold it in high esteem.

In that blog post I suggested that Mr. Gunn’s readers might be surprised to learn of Mormonism’s less-than-reverent view of the Bible. In this post I want to talk further about an idea suggested by Mr. Gunn; namely,

“To anyone harboring the persistent misconception that ‘Mormons are not Christians because they have their own Bible, the Book of Mormon,’ we say that we believe in the Lord Jesus Christ as our Savior and the author of our salvation and that we believe, revere, study and love the Holy Bible. We do have additional sacred scripture brought forth by the Lord, including the Book of Mormon, which supports the Bible, never substituting for it.”

In addition to being surprised by the classic LDS view of the overall insufficiency and fallibility of the Bible, another surprise awaits Mr. Gunn’s readers. That is, while Mormons will be studying the New Testament in 2015, their lessons will often employ Joseph Smith’s own “translation” of the Bible. Mormon apostle Bruce McConkie told Mormon Church members of the value of this altered and “corrected” Bible:

“The Joseph Smith Translation, or Inspired Version, is a thousand times over the best Bible now existing on earth. It contains all that the King James Version does, plus pages of additions and corrections and an occasional deletion. It was made by the spirit of revelation, and the changes and additions are the equivalent of the revealed word in the Book of Mormon and the Doctrine and Covenants. For historical and other reasons, there has been among some members of the Church in times past some prejudice and misunderstanding of the place of the Joseph Smith Translation. I hope this has now all vanished away. Our new Church Bible footnotes many of the major changes made in the Inspired Version and has a seventeen-page section which sets forth excerpts that are too lengthy for inclusion in the footnotes. Reference to this section and to the footnotes themselves will give anyone who has spiritual insight a deep appreciation of this revelatory work of the Prophet Joseph Smith. It is one of the great evidences of his prophetic call” (Sermons and Writings of Bruce R. McConkie, 289).

Looking at the first lesson in the Gospel Doctrine: New Testament Teacher’s Manual used for the 2015 Mormon Sunday School course of study, class members are directed to passages from Luke and John, both specifically from the Joseph Smith Translation (JST). 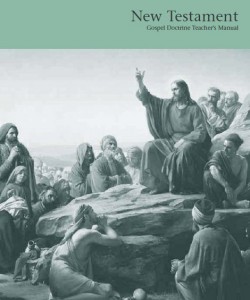 Though the identity of Jesus as the Word is obscured in the verse from the JST, and though Joseph Smith’s assertion in the text itself is that “the gospel was the word,” the LDS Teacher’s Manual explains, “‘the Word’ in John 1:1…refers to the Savior.”

Let’s parse this passage a bit. As I understand it, in the Bible the focus of John 1:1 is the identity and eternality of Christ, the second member of the Trinity.

In Joseph Smith’s “translation” the focus is on the continuity across time of the preaching of the gospel and the gospel’s presence with the Son.

In the Bible, Christ, as the Word, is identified as God.

In the Bible we are told that in Jesus is life (i.e., He has life within Himself, He is the source of life, another proclamation of His deity; see John 5:26), and that this life is the light of men (Christ is the Provider of both natural and eternal life).

In the JST the gospel (i.e., “all the doctrines, principles, laws, ordinances, and covenants necessary for us to be exalted in the celestial kingdom”) was “in him,” and this system (not Christ Himself) is the life and light of men.

The LDS Teacher’s Manual explains the Mormon understanding of Christ based on John1:1-3, 14:

“a. He ‘was in the beginning’ with God the Father (John 1:1–2). Note that the Savior’s mission began in the premortal world, long before he was born in Bethlehem.

“b. He is God (John 1:1). Explain that when we speak of God, we usually refer to Heavenly Father. However, ‘the personage known as Jehovah in Old Testament times … is the Son, known as Jesus Christ, … who is also a God. Jesus works under the direction of the Father. … Many of the things that the scripture says were done by God were actually done by … Jesus’ (Bible Dictionary, ‘God,’ 681).

“c. Through him the gospel was preached in the premortal world (Joseph Smith Translation, John 1:1).

As is evident, some superficial similarities exist between the biblical Jesus and Mormonism’s Jesus, but the disparities are vast and very deep. So much so that Christians generally agree with late Mormon Church President Gordon B. Hinckley who said that Mormons believe in a “different Jesus.”

Mr. Gunn promoted the idea that Mormonism is a Christian religion because Mormons believe in Jesus Christ as Savior and because they study the Bible. Superficially, that argument may have some merit. But looking beneath the surface reveals something else altogether. Mormonism promotes trust in a “different Jesus” who cannot save, and teaches doctrine from a false prophet’s rewrite of the Holy Bible. For those who believe the Bible as God gave and preserved it through millennia, this places Mormonism far outside the boundaries of Christianity.

23 Responses to Mormons Study a New Testament in 2015